“Aspire to Inspire before you Expire!”

In the First Reading from the Book of the Prophet Amos (6:1A, 4-7), the Prophet is delivering a strong message or oracle from God to the people of the northern kingdom of Israel in the 8th century BC regarding their abandonment of the ways that God and Moses had taught them. Their great sin was the reveling in their luxuries while the poor went hungry and all were being lead to worship pagan gods. Their doom is being prophesied by Amos, and their destruction is not far off. God cannot and will not tolerate being mocked.

Through the Psalmist in the Responsorial Psalm, God commends and blesses those who lift up the poor, the fatherless and the widow; but the evil doer He warns severely. In this reading, we hear the opposite side of the message from Amos, that is, the blessings that follow those who share their wealth and/or talents with those less fortunate.

In the Second Reading from St. Paul’s First Letter to Timothy (6:11-16), Paul gives us a lesson that extends the message about charity in the First Reading and the Responsorial Psalm. There is more to loving God than just looking after the needs of the poor. He is saying that when we take up our baptismal commitment (“noble confession”), we promise to live according to all the teachings of Christ and, indeed, to reflect the very life of Christ Himself. We can all learn from Paul’s remarks because we are Christ’s disciples of today.

Gospel: First there is the matter of names. Ironically, the rich man goes nameless, whereas we are told at the outset that the beggar is called Lazarus. Tradition has tried to make up for this by calling the rich man Dives, which is simply the Latin word for “rich man.” The irony is that while it is a preoccupation of the “great ones” of this world to be remembered, it is one of the “nameless ones”—the beggar, who gets named in the story. A further irony around names: after death, when “Dives” calls upon Abraham for a drink of water, he refers to Lazarus by name, indicating that he was very much aware of this man starving at his gate. Further, although Dives had not bothered to send a servant to meet Lazarus’ needs, he has the arrogance to try to make an errand boy of Lazarus to quench his own thirst.

The rich man in this parable was a complete success in the eyes of the world.

Jesus says he was dressed in purple.
•    In the ancient world, purple was the symbolic color of wealth, privilege and power,  because the dyes that were used to make cloth purple were extremely expensive.

Jesus also says that he wore fine linen.
•    Linen came from Egypt. You couldn’t make it in Palestine. You had to import it. And that too was extremely expensive.

Lazarus, on the other hand, was a complete failure in the world’s eyes.
•    He was utterly helpless,
•    crushed by poverty,
•    incapacitated by sickness and disease.
•    What’s more, in ancient times, those characteristics were interpreted as a punishment for moral depravity.
•    So in the eyes of the world, Lazarus was not just an economic failure, but a moral and spiritual failure too.

Why had the rich man been so successful? We don’t know.
•    Maybe he inherited his money.
•    Maybe he had worked hard and used his extraordinary intelligence to build up a thriving business.

Jesus doesn’t go into the reasons. Rather, he uses these two examples to teach us one simple lesson: worldly success can be dangerous.

Worldly success had blinded him to the needs of others and deafened him to the voice of God speaking in his conscience. It is easier said than done because there are many things that could hinder us or hold us back.

One thing that hinders us is indifference. Honestly, we can play indifferent to the situation around us. Truly, we can play naïve towards the ‘Lazarus’ lying at our gates, begging, and needing our help, not just food or money but support, encouragement and listening ears. But no, to be truly a Christian, we need to counteract this attitude of indifference by focusing less on ourselves and more on the needs of the modern-day ‘Lazarus’ lying outside our windows and our gates. This is one point that Jesus tells us in the parable – that for us to be pleasing to God, we must learn to share the riches we have to others especially with the needy. We need to understand too that it doesn’t mean Jesus doesn’t like rich people. He does. In his life, he had some associations with them. To name a few we have Zacchaeus (Lk 19:1-10), Matthew – a tax collector whom he called to be one of his disciples (Mt 9:9-13), and some well-off women too like “Joanna the wife of Chuza, the manager of Herod’s household; Susanna; and many others. These women were helping to support them out of their own means” (Lk 8:3). Even in his death, a rich man called Joseph from Arimathea helped Mary organize his burial (Mt 27:57-60.) What Jesus doesn’t like in the rich people is the way they use all their resources and wealth only for themselves, for their own self-gratification and not helping others in their needs. So for him Christian life  it is not just a matter of not doing anything bad to people, but more so of doing good for all. Jesus wants us to learn the lesson on what indifference can do to us. We need to see the ill-effect of the indifferent attitude of the rich man in the parable today. He could see Lazarus at his gate day by day. He could see how miserable he was. But even then, that didn’t move him to lift him up. He continued feasting everyday, leaving Lazarus starving or living on the scraps that fell from his table. Lazarus experienced a miserable life because of the rich man who didn’t do anything to uplift his situation.

Edmund Burke, an Irish orator, philosopher, & politician (1729 – 1797)  is certainly right when he once said: “All that is necessary for the triumph of evil is that good men do nothing.”

To combat indifference, is to listen to ‘Moses and the prophet’ today. ‘Moses and the prophet’ means the Scriptures. This means we need to read, and listen to the Scriptures daily especially the Gospels because it is a great witness for us, a wonderful testimony for us on how God overruled the power of indifference and transformed it into the power of love, the love that is willing to die for the beloved. If Christ played indifferent to our sins, as if he didn’t care, there would be no salvation for us.

Another way to combat indifference is to look beyond what we have now. Our bank security or insurance can’t be our insurance to heaven. We can’t take them with us when we die. So if we come to terms with this truth of our humanity, we don’t hold our resources only for ourselves, but we use them to assist others in their needs. In this way we are developing in ourselves the attitude of longing and craving for heaven, that longing for eternal life. St Therese of the Child Jesus could help us develop this attitude by listening to her words: ‘I will spend my heaven doing good on earth.’

The other hurdle we need to overcome is arrogance. This is one thing that Prophet Amos preached against the wealthy people of Judah and Israel in our First Reading today. They’ve got wealth and ‘lying on ivory beds’ but they didn’t care for the plight of the poor. These are the people, or these can be ourselves too, who sometimes say: ‘I have worked so hard for this, I deserve this. So you must work hard for it too.’ This is just a display of arrogance, claiming all the credit to all the good things to ourselves, but when things turned sour, we blamed God.

To kill the arrogance in us is to acknowledge daily that everything we have received, everything we have, and all that we are, are not of our own making. It is God who has blessed us with all these things without our even asking for it. So there is no reason for arrogance. In fact this calls us to humility.

To combat arrogance is to humble ourselves, and yet we must do the best we can. We can do this by keeping in our hearts the words of St Paul in our Second Reading today: ‘We must fight the good fight of the faith. We are to make this our aim in life to be saintly and religious, filled with faith and love, patient and gentle.’

‘Lazarus’ is outside the gates of every house today. The asylum seekers, the refugees, the victims of war and violence, the homeless. Let us pray that as Catholics, we will stop being indifferent to the plight of the many Lazaruses around us today and that we may do something for the poor using our wealth and talents.

I leave you with a quote from Eugene Bell Jr, and I can assure you it is a challenge for all of us: “Aspire to Inspire before you Expire!” Aspire to new heights and challenges, especially those that will change the life of people around you for the better.  When you do, you will inspire other people and yourself as well! 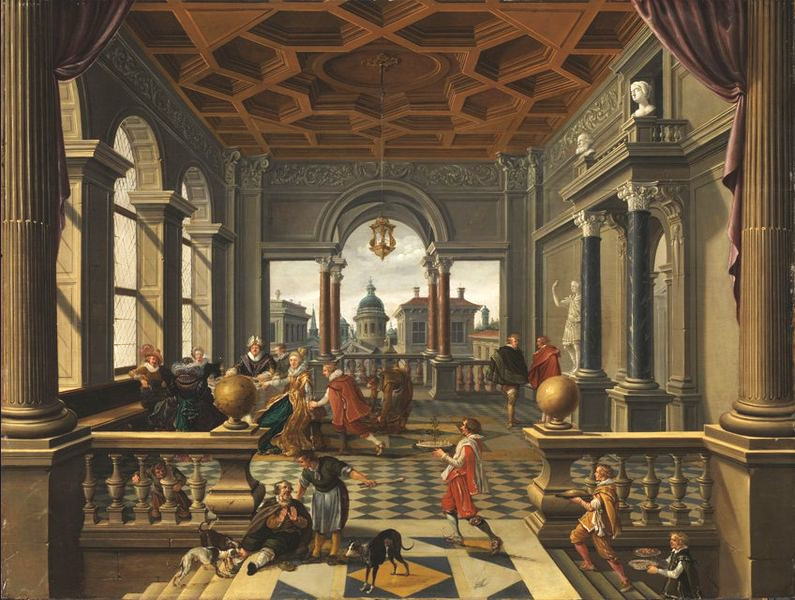