“Come, Holy Spirit!
Live in me and in all of us
as you lived in Mary and the Apostles.”

Today is “Pentecost Sunday,” the fiftieth day after the Resurrection. On this day, we solemnly commemorate that great event when Jesus fulfills his promise of sending the Holy Spirit upon his timid disciples, who gathered behind the closed doors of the Cenacle in Jerusalem.

The feast of Pentecost is the culmination of the Paschal mystery and it marks the end of the Easter season. The Easter candle, which has been burning since Easter to remind us of the light that has come into the world, will be set aside and used only if there is a baptism. Next week we continue what is called ‘Ordinary Time’ which simply means that the joyous feasts have ended, and we go back to the Gospel of St. Luke and continue to read the story of Jesus, focusing primarily on his teachings and parables.

Although today we end the Easter Season, it is also a reminder of starting something new, for Pentecost is considered to be the birthday of the Church. Have we ever asked, why do we celebrate the Eucharist on Sundays? Sunday is actually deemed to be the first day of the week; Sunday is the day that God began creation we are told in the Genesis story. The Spirit of God moved on the waters on the first day! For the Jews, Spirit is a feminine gender word which also means breath or wind. Like God, Jews rested on the seventh day, Saturday, and early Christians, too, used to go to synagogues on Saturdays. With the advent of Pentecost, however, which is 50 days after Easter, itself a Sunday, the Church has traditionally also celebrated its birthday and the weekly ‘Lord’s Day’ on a Sunday. We celebrate Eucharist on Sunday, then, as a reminder of the first creation and of the second creation. The Holy Spirit that stirred the waters of creation returned to us on Pentecost making a new creation, her Church, and making us new creatures because of the Resurrection. This is really what we are all about today. And every Sunday!

The First Reading of this Sunday tells the story of how Christ eventually fulfilled his promise to his disciples who faithfully heeded the injunction, “Do not leave Jerusalem until the advocate comes” (Acts 1, 5). From the perspective of this reading therefore, today’s celebration is that of a promise fulfilled, and the reward of faithful obedience and steadfastness in prayer. Like the early disciples, every true believer has been empowered specially by the Holy Spirit. We have been refilled with a new unction for function and therefore, must like them also, welcome and appreciate the various gifts made available to us by the outpouring of the Holy Spirit. It is important to note here (as in one of the illustrations above) that one of the greatest aspect of this feast that is grossly misunderstood and abused is the gift of tongues. In this regard, one must be careful in exercising or claiming to have received this gift by fabricating and learning all forms of “junk and mock speeches” that cannot be understood, interpreted or explained by anyone. The danger inherent in this is, sinning against the Holy Spirit. We must note Jesus’ warning: “Any sin against the Son will be forgiven but…against the Holy Spirit will not” (Mtt 12, 31-32). It is important therefore that we grasp very well Paul’s teachings on the issue of gifts and speaking in tongues in Cor 12 and 14. It is quite unfortunate these days that so much lies have been told against the Holy Spirit especially through the speaking of false, forced and learned tongues. It is a gratuitous gift from God and does not come through learning and practicing. Today, it is quite easy and alarming to hear people using parlance like: “the spirit says”, “the spirit moved me”, “the spirit ministered to me”, “I heard the spirit speak to me”, etc. Anyone who prays or speaks false tongues is both blaspheming against God and committing sacrilege – a sin against the Holy Spirit. This gift was given to the apostles to aid them spread the good news to different people who gathered from all nations to listen to them: “Now there were devout men living in Jerusalem…each one bewildered to hear these men speaking his own language about the marvels of God.” It was not given to them to boost their ego, for their own personal or selfish interests, or to break away and found their own Churches so as to extort money and materials from people. Instead, it was given to them in order to pass on the message of eternal life on to others.

In the Second Reading of today, Paul makes a very important statement: “No one can say ‘Jesus is Lord’ unless he is under the influence of the Holy Spirit.” What this means is that it is God himself that enables us through the gifts we received today to recognize the lordship of Christ, as Christ equally tells us: “No one comes to me except the Father draws him” (Jh 6, 44). Recognizing the lordship of Christ is one task that was very difficult for Satan the tempter, because, he was without the Holy Spirit. The obvious fact is that when Paul uses the phrase “say Jesus is Lord”, he is not simply referring to the literary pronouncement of the lordship of Jesus as one could easily pay lip service to it. Instead, what Paul means by “say” here is, making Jesus the Lord of one’s life. To do this one needs the power, and conviction of the Holy Spirit. To say Jesus is Lord is to live it, and to actually have him as the lord of our lives. Only those who are being led by the Holy Spirit are truly sons and daughters of God (Rom 8, 14). It is the Spirit that we receive today, that will therefore prompt us to proclaim the lordship of Christ from our innermost being and with utter conviction. This is why Paul says: “But you received the spirit of sonship and by him we cry Abba Father. The spirit testifies with our spirit that we are God’s children” (Rom 8, 15-16).

Gospel: Once upon a time a group of powerful people set out to build a tower that would reach to heaven. They assembled architects, masons, and an army of labourers. They brought in a huge supply of the finest granite and cement. The organisers were of the same mind and spoke the same language. The plans were drawn up and the project got under way. However there was trouble from the word go. The people involved in this wonderful project were interested in one thing only – their own glory. The tower was to be a monument to them. There was jealousy among them because each wanted to leave his mark on the tower. There was a rash of strikes. There were numerous accidents and the workplace became something of a battleground. The workers had bitter quarrels over politics and nationalities. Materials were constantly disappearing. Costs mounted. The banks began to withdraw support, as did many of the sponsors of the project. Mistrust was rampant. The builders no longer spoke the same language. In the end the tower was abandoned. It’s a modern version of the tower of Babel. The tower is a symbol of man’s attempts to create on earth a paradise without any recourse to God. Perhaps a really accurate statement about the state of our materialistic world today – an attempt to create a paradise without any recourse to God! After they had eaten the forbidden fruit, God sent the man and woman from Paradise. But what did they do ? They undertook to build a paradise of their own, from which they endeavoured to banish God. But what kind of Paradise was that going to be? The effort is still going on. We have massive highways, supersonic planes, nuclear power stations, manned space flights. Yet we cannot live at peace with one another.

Pentecost is meant to be a reversal of what happened at Babel. At Pentecost we have a group of people who came together, ordinary people with little faith in their own abilities, but great faith in God. They set out to build a “tower” of a different kind. This tower took the form of a new community, a spiritual stairway to heaven. On Pentecost Day the apostles began to build this new community. They spoke a new language – the language of love and co-operation, a language that all people of good will understand. It shines in the face and is felt in the clasp of a hand.

Today is the anniversary of this great happening. It is the birthday of the Church, the community of the followers of Jesus. On this day, thanks to the coming of the Holy Spirit, the infant Church took its first steps. That Church was and always will be made up not of saints but of sinners. Down the ages it has had its share of problems and setbacks. But it is still being built. Part of it is assembled here today. We gather here not as rivals but as friends. Factors which normally divide people – such as class, colour, age, wealth – must count for nothing here. Here we are one family under God.

At Pentecost God, in sending the Holy Spirit, reversed the disaster of Babel which divided and confused the unity of the human family. The Holy Spirit makes known to all peoples the one true God, and so creates from the many languages of people one voice to profess one faith. It is really a wonderful thing that began on Pentecost Sunday. We not only find shelter in this tower- we are, each one of us, invited by God to be a builder of it. Our response, of course, is a matter of our free choice, and Pentecost is for us to reflect on how we exercise that free choice to build the Church. It’s a good weekend for us to reflect on how each one of us values our “engagement” in the Parish – in the work and mission of the Church, actually! Certainly a significant number of people in the Parish have worked to develop a plan for the future, but that activity will always be limited or enhanced by the extent to which we all take responsibility. Unlike Babel, we need to make a place for God, to work together to “make God’s Kingdom come” not only in our own lives but in our real world. We believe that we are all of us “gifted” by the Holy Spirit to do great things. Let’s not ignore those gifts or leave them unpacked. That would be the ultimate ingratitude!

Pentecost is not just a season or an annual feast for us. It is not simply a fact or event that we commemorate. It is our beginning, our entry point, our ever-present moment. Whatever it is that we face in our lives, at whatever point of our own story we find ourselves, the Holy Spirit is interceding for us with sighs too deep for words. The Holy Spirit is working in us to transform and inspire us, so that God’s great work of salvation can be shown forth in us.

The perpetual Comforter that the Lord promised to us is with us now.

So wherever we are today, however our lives are going, the Spirit is with us. Inspired by the Holy Spirit’s action, we receive the courage to lift our hearts in hope, and the Spirit fills us, making us new and beautiful! 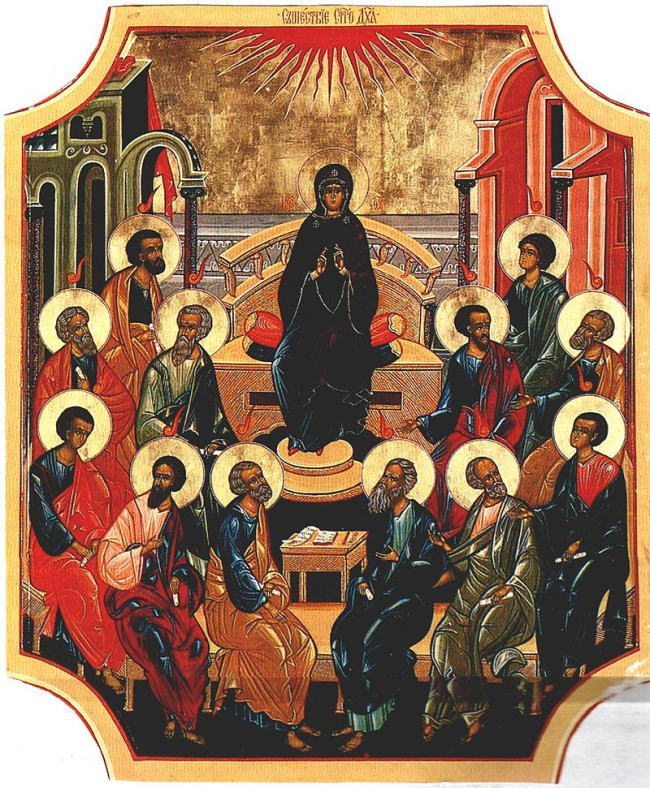 This entry was posted in 2017, Easter, English, Friar Gaspar, Year A. Bookmark the permalink.