Twentieth Sunday in Ordinary Time – A

Today is the Twentieth Sunday in Ordinary Time. Each of today’s Scripture Readings speaks of the universal nature of God’s salvation. It is not limited to the Jews only, His chosen people, but also extends to the Gentiles & foreigners. God is the God of all nations and He moves the fence to include all people.

In the First Reading from the Book of the Prophet Isaiah, the prophet Isaiah depicts the beautiful vision of ‘a house of prayer for all peoples.’ Foreigners who love and serve the Lord, keeping faithfully his commands, will be brought joyfully into the Lord’s holy mountain. They too will join the chosen people Israel in divine worship. In the Second Reading from his Letter to the Romans, St. Paul rejoices in his ministry to the Gentiles. He trusts that the conversion of the Gentiles will prompt the Jews to conversion and he looks forward to the day when the Jews will embrace the saving mercy of God. In the Gospel Reading from St. Matthew, we have the healing of the daughter of the Canaanite woman and Jesus praises the faith of the pagan woman and cures her daughter. We are presented with his apparent hesitation to heal her daughter until her persistence demonstrates her great faith.

“A HOUSE OF PRAYER FOR ALL PEOPLES.”

The First Reading of today from the Prophet Isaiah, is one of the strongest statements of universalism in the Jewish Scriptures. It refers to the period of restoration after the return of the Jews from exile in Babylon. The exile had made them wiser, disposed to listen to the word of God; to observe what was just and do what was right. The post-exile era was seen as a new age and it was a time in which the prophetic voice was raised up both to exhort the Jewish people to fidelity to God’s covenant and to expand their horizons to the universal proportions of the Divine call. The Jewish people were in constant danger of falling into a suffocating self-importance based on their sense of themselves as God’s chosen people. So, the Prophet Isaiah speaks on behalf of God that the house of the Lord shall be called a house of prayer for all peoples and tells that God’s blessings are available also to the foreigners. In the prophetic exhortation and warning the Lord promises to bring to his holy mountain all the foreigners, the Gentiles who are willing to unite themselves to him. This refers to the universal salvation, the necessity for purification and fulfillment of hopes through the arrival of the promised Messiah.

PAUL, THE APOSTLE OF THE GENTILES:

In the Second Reading of today from his Letter to the Romans, the worldwide saving mission to all peoples is exemplified by St. Paul, the apostle to the Gentiles. Having encountered intimately the Risen Lord and powered by the apostolic energy of the Holy Spirit, St. Paul followed obediently the dynamics of the Divine plan of salvation, i.e. ‘to the Jews first and also to all nations.’ He was deeply grieved that the Israelite people did not welcome the Gospel and did not believe Jesus Christ as their Messiah. And yet, the ever-positive St. Paul never lost hope. He was convinced that Israel’s fall is temporary, not definitive. His hope for the Israel’s conversion was based on the wholly-gratuitous love of God and his unfailing mercy for all.

St. Paul also explains how Israel’s fall made it possible for the Gentiles to accept Jesus Christ and thereby stir Israel to envy. Surely, he and his companions had to face terrible opposition to convince the pagans to become Christians. Here he was a Jew, telling Gentiles or non-Jews that salvation has come through Jesus Christ, also a Jew. Still, the Gentiles followed Christ in great numbers. So, St. Paul says if the failure of Israel brought such a blessing, imagine the result when they all accept Jesus! While the Jews have ruptured the right relationship with God by rejecting the good news, they are still loved by God because the election of Israel is irrevocable. The promises or covenants with the patriarchs still stand forever. God simply doesn’t vacillate about those who He blesses and chooses.

He further says, in point of fact, both Jews and Gentiles have failed to obey God’s will at one time or another and have sinned – Gentiles by ignoring what their conscience told them was right when they embraced pagan atrocities, while Jews by rejecting Jesus Christ. These disobedience opened them all to God’s mercy, which is greater than their sins and is available for all.

JESUS AND THE CANAANITE WOMAN:

The Gospel Reading of today From St. Matthew provides yet another insight into the universality of God’s offer of salvation. Here, we have an account of Jesus and the Canaanite woman, which is one of the very rare encounters of Jesus with the Gentiles.

When Jesus withdrew to the region of Tyre and Sidon, he was approached by a Canaanite woman abounded in love for her daughter who was tormented by a demon. She pleaded her case with him. The disciples want to stop her and even Jesus seems to brush her aside. Actually, shocking to our ears, in perhaps the toughest language used by Jesus in the Gospels, he tells the woman that his mission is only to the Jews – “I was sent only to the lost sheep of the house of Israel,” and that it cannot be shared with dogs, which is how the Jews regarded the Canaanites – “It is not right to take the food of the children and throw it to the dogs.” These words can be taken in a humorous sense and this could happen because Jesus and the woman had the measure of each other. She knew very well that the Jews called the Gentiles ‘dogs.’ It was, of course, a term of contempt. Dogs are known as scavengers; they will eat anything they find on the ground. The Gentiles were seen as people who were ready to eat anything, including unclean foods like pork. Gentiles would have known very well that Jews used this term about them and were used to hearing it.

Now, this is one of the very rare occasions when Jesus seems to be very harsh – uninterested, even hostile to what seems like a perfectly reasonable request from this Canaanite woman. Right away it seems like Jesus is rejecting her because of who she is – a woman belonging to the people who were driven out of the land of Canaan by the people of Israel. The Canaanite woman however is not frightened by the put-down of this wonder man. She proves herself a match for his tongue. She surely had no love for this Jew, but she believed he would deliver. She had a sick youngster whom she deeply loved and was willing to swallow insults of any sort. She proves to be one of the most remarkable people in the Gospels. She digs in, takes Jesus on, and proves herself to be the wordsmith he is, and even better. She hits right between his eyes with her famous reply, “Please, Lord, for even dogs eat the scraps that fall from the table of their masters.”

Jesus was charmed out of his sandals by her reply. He knew he had been whipped bad. She had outwitted him at the word game, of which he was allegedly the master. She receives from him his highest praise – “O woman, great is your faith! Let it be done for you as you wish.” Jesus holds up the woman’s faith as reason for her prauer being granted. Her persistence and astuteness are rewarded by Jesus. Clearly, this event signals the inauguration of a new era, a new covenant of grace based on faith in Jesus rather than adherence to the Law. The act of healing in the Gospels is always a sign that the Messianic era has been inaugurated in the person of Jesus. So, the healing of the Canaanite woman proclaims that the era of the Messiah has finally dawned in Jesus, with the full implications of a prophetic word that offered salvation indiscriminately to all.

To conclude: A story is told that one day a certain curious person in heaven asked St. Peter: “How many Hindus are in heaven?” St. Peter replied: “No Hindus.” Then he asked: “How many Buddhists?” “Not even one,” replied St. Peter. The man was surprised. He said: “Oh then, there are only Christians in heaven?” “No there are no Christians in heaven either,” replied St. Peter. “How many Catholics?” asked the man. St. Peter replied: “No Catholics either.” Then he continued, “Heaven is not meant for a particular group of people. Here there is no distinction between Hindus, Muslims, Buddhists or Christians, for all are welcome in heaven, and there they are all children of God.”

Now, we are the followers of Christ and we believe in our salvation through Jesus Christ. What is our view regarding salvation of others? Is there salvation outside the Church? All the three Scripture Readings of today tell us that God intends salvation to be available for all persons. It is a truth of the Catholic faith that Jesus Christ, as God made man, offers through his teaching and through his death and resurrection the way to salvation for all peoples. Though limited in historical time, his teaching, life, death and resurrection have a universal effectiveness and application. He moves the fence and includes all and invites us to do the same. He does not make distinction based on ethnicity, religion, gender, social class, or economic standing. What really matters is believing in him and obeying his commandments. These are the criteria by which we will be judged. The joy of the Kingdom of Heaven awaits all who are faithful to him.

“O God, O God, let all nations praise you!” And this is the Good News of today. 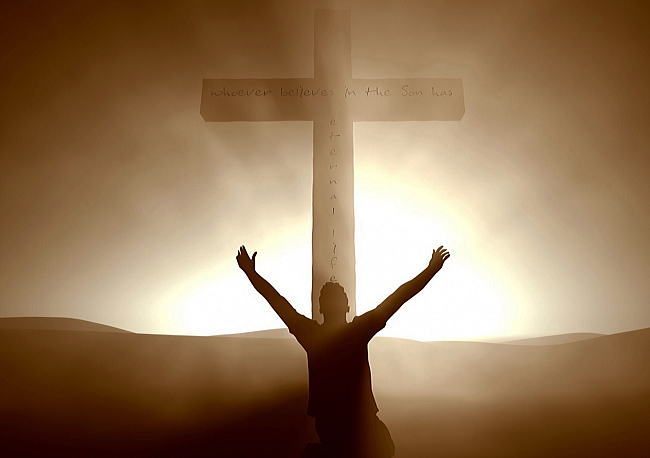