Twenty-ninth Sunday in Ordinary Time – A

In today’s Gospel passage, the Pharisees, in an effort to entrap Jesus and arouse the people against him ask him a tricky question, which demands one to take a stand – “Is it lawful to pay the census tax to Caesar or not?” What is our stand – in favor of God or against Him?

Today is the 29th Sunday in Ordinary time. This is also the 3rd Sunday of October, and so, customarily we celebrate it as ‘World Mission Sunday.’ World Mission Sunday is a day set aside for the Catholic Church throughout the world to publicly renew its commitment to the missionary command of Jesus. It is celebrated on the third Sunday of October every year. It was created by Pope Pius XI in 1926 as the day of prayer and propaganda of missions.

There is a loose connection in today’s Scripture Readings between the absolute power of the Lord and earthly, temporal power, and affirm the evident supremacy of the Lord beyond all temporal power and the necessary response of praise due to Him. The First Reading from the Book of the Prophet Isaiah, depicts the figure of a great Persian ruler, Cyrus the Great, who defeated the Babylonians and released the Jews from captivity, allowed them to return to their homeland, and subsidized the rebuilding of the Holy Temple and the city of Jerusalem. Indeed, his benevolent humane ways and enlightened practices as an earthly ruler made him a docile instrument of God’s saving plan. The Gospel Reading from St. Matthew draws a subtler distinction between temporal power and God’s purposes and underlines Jesus’ teaching – “Repay to Caesar what belongs to Caesar and to God what belongs to God.” This is an invitation for us to embrace our total belonging to God. Just as the image of Caesar stamped on a Roman coin indicates that the coin belongs to Caesar, the image of God stamped on every human being asserts that each one belongs to God. In the Second Reading, St. Paul, in his joyful 1st Letter to the Thessalonians, gratefully recognizes that the Gospel they have received is not due only to the human preaching of Paul, Silvanus and Timothy, but also ‘in power and in the Holy Spirit.’ St. Paul is conscious of the effect of God’s power through human instruments.

KING CYRUS THE GREAT, ‘THE ANOINTED ONE’ OF THE GOD OF ISRAEL:

The previous verses to today’s First Reading from the Book of the Prophet Isaiah, prophesy that there will be a return of the Jews to Jerusalem from exile in Babylon and that the Temple will be reinstated. This indeed did happen. Cyrus the Great, a king of Persia who conquered the Babylonians, released the Jews from captivity, allowed them to return to their homeland, and subsidized the rebuilding of the Holy Temple and the city of Jerusalem. He even returned the silver and gold taken from the old Temple.

In the rise to power of Cyrus, pagan king of Persia, the Prophet Isaiah sees the hand of God at work. The decision of Cyrus, after his conquest of Babylon, to repatriate all of the subject peoples within its boundaries was judged a miraculous proof that the God of Israel held power over the entire earth. In today’s passage, it is God who calls Cyrus his “anointed . . . whose right hand I grasp.” It is remarkable and unusual to hear a pagan king referred to as God’s ‘anointed,’ a term used only of kings, prophets and priests in Israel. The passage is a forceful statement of God’s sovereignty over even the most powerful of earthly rulers and, by implication, over their gods. It is important to see the context in which Isaiah sees Cyrus. Cyrus may be the lordly providence over the humans in a vast empire, but himself falls under the providence of God. God is working through him, though he does not know the one who calls him. The inner dynamic of God’s presence through his Spirit is working silently away, and it calls for recognition.

In the Second Reading of today from his 1st Letter to the Thessalonians, which is the oldest book of the New Testament, we could feel the holy pride of St. Paul bubbling with gratitude for the wonderful response of the Thessalonians to the Gospel. He speaks of the many gifts they have received from God viz. faith, love and hope and that he is so grateful to God for them. St. Paul is conscious of the effect of God’s power through human instruments. Both the way in which the Gospel was proclaimed by St. Paul and the way it was received by the Thessalonians with joy in spite of persecution witnesses to the working of the Spirit. St. Paul further encourages them to live according to these virtues as children of God, as we owe ourselves to Him. It so often happens that people live as if they don’t owe anybody anything. As if they were self-made men and women.

In past few Sundays we saw Jesus attacking the Pharisees and the elders the people for their failure to recognize in him the Word of God, the power of God, the compassionate love of God. All they could see was a man who broke their laws. Today, in the first of three challenges by different leaders, they hit back. Their plan is to get Jesus to discredit himself.

The first challenge, in today’s Gospel Reading from St. Matthew, comes from the Pharisees. We see that surprisingly the two opposite groups viz. The Pharisees (rabid nationalists and totally anti-Roman) and the Herodians (sympathizers and collaborators with the Romans) have put aside their mutual antipathy and have joined together in an effort to entrap Jesus and arouse the people against him. It is a strange mixture because they were bitterly opposed to each other.

Their opening statement is clever and very flattering. They praise the utter honesty and integrity of Jesus. All of which was perfectly true. Jesus, in fact, is being praised as endowed with God’s own sense of truth and justice, totally impartial, with perhaps a bias for the poor, the weak and powerless. And it is precisely in this strength of Jesus – telling it like it is without fear or favor – that they hope to entrap him.

After this flattering softening up and linguistic foreplay comes the apparently straightforward but tricky question, which demands one to take a stand – “Is it lawful to pay the census tax to Caesar or not?” Jesus is the focus of a hatred. They are insincere and their objective is to eliminate this troublemaker from their midst. They think they’ve found the perfect ruse. Get Jesus to oppose taxes and earn the anger of the Romans and their minions. Get him to support taxes and arouse the ire of the nationalists.

As he does so often in the Scriptures, our Lord leaves his opponents and attackers stunned by his responses. He immediately recognizes their bad intention to entrap him. If he said taxes shouldn’t be paid to Caesar, then he’d be denounced to the Romans. If he said that the taxes should be paid, then he would be denounced to the strict Jews. So he asks them to show him the coin and then says, “Whose image is this and whose inscription?” They reply, “Caesar’s.” Then he gives them his masterly answer, “Then repay to Caesar what belongs to Caesar and to God what belongs to God.” This is the stand which Jesus takes. At first glance, one might think that he displays his wisdom only in throwing a plum to both sides in the national dispute. The Romans want their taxes, while the Jews want their religion and recognition of the kingship of God. Surely Jesus deftly avoided their trap, but at the same time laid down a rule of thumb that has served ever since.

As a matter of fact, there is a deeper aspect to today’s encounter – Jesus says, “Then repay to Caesar what belongs to Caesar and to God what belongs to God.” Now, the coin used to pay the poll tax bore Caesar’s image and name. Therefore, in saying that we should give to God what is owed to God, Jesus reminds us of the one whose image we bear. Now, we all are created in the image of God – “God created man in the image of himself, in the image of God he created him, male and female he created them.” That is to say, it is God’s image and it is His name, which is inscribed in our hearts; and therefore, we all wholly belong to God and we owe to Him everything. That’s the bottom line. Everything we possess, all that we are, the very gift of life has been given to us by the God who made us in His own image and so we owe God our thanks, our praise and our devotion.

“Then repay to Caesar what belongs to Caesar and to God what belongs to God.” What does this imply? ‘Caesar or God ?’ or ‘Caesar and God?’ Actually, we all have a dual citizenship – we are citizens of our country where we are born; we also have spiritual citizenship by virtue of our new spiritual birth. So we have to play a dual role as citizens of our earthly state and also as citizens of the heavenly kingdom. There is no dilemma between state and God. A good Christian is also to be a good good citizen. But it is always to be kept in our mind that the Lord, our God should be the priority, who is the Almighty and is above all earthly rulers, even the gentiles, as it is said in the First Reading of today, from the Book of Prophet Isaiah – Cyrus the Great, a Persian king, is called ‘God’s anointed one’ though he did not know the God of Israel, and is made His instrument in freeing the people of Israel from their Babylonian captors and sending them back to Jerusalem to rebuild their temple and city.

In today’s gospel, rather than engage in a superficial dispute over separation of church and state, Jesus reasserts the absolute claim of Jewish monotheism, namely, that all earthly powers are subject to God’s sovereignty and out of a snippet of political crossfire comes the reminder of just how much we owe and to whom. Caesar was owed that which bore his name and his image, a coin. God is owed that which bears His name and His image, our own very selves. Can we give ourselves to God, all that is ours without holding back anything? And this is the Good News of today. 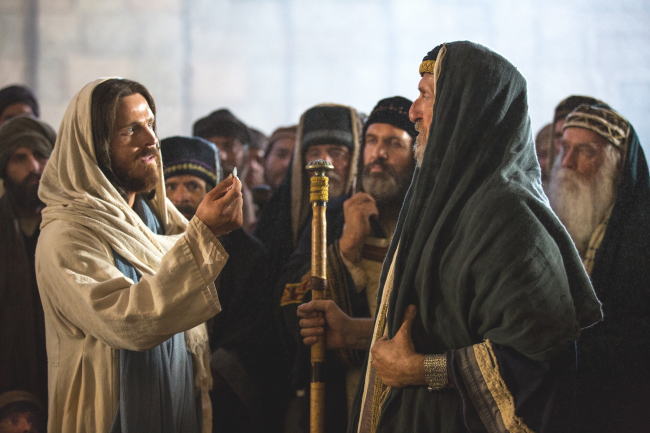