Our Lord Jesus Christ, King of the Universe

ALL GLORY TO JESUS CHRIST, OUR LORD AND KING, NOW AND FOREVER!

I would like to begin with a humorous story. Once a priest was giving a homily and as he went on, he became more animated. He made a sweeping gesture – and knocked his papers from the pulpit. He scrambled to pick them up, then asked, “Now, where was I?” A voice from the congregation responded, “Right near the end!”*

Well, we are at the end – not of the homily, but of the liturgical year! On this final Sunday we celebrate the Feast of Christ the King. We acknowledge Jesus as King of the universe, of the earth and of our lives.

TODAY IS THE THIRTY-FOURTH AND FINAL SUNDAY of the liturgical year. Next Sunday we will start a new year with the First Sunday in Advent. As is the custom now, on this last Sunday we celebrate the feast of Jesus Christ our King. All during the past year we have been hearing the Gospel read to us and reflected upon in Sunday (and weekday) homilies. Perhaps we have done some prayer reflection of our own. Today somehow sums up all that we have been hearing. The Jesus we have watched going around the towns of Galilee, Samaria and Judea, the Jesus we have watched teaching, healing, consoling, liberating is our Lord and King. He is the visible presence of God in our midst.

There are two very contrasting images of Christ presented to us in today’s readings. In the Second Reading from the First Letter to the Corinthians Paul presents a powerful and awesome picture of Christ as Lord and King. As all have died because of the fall of Adam, so all will be made alive in Christ. Christ is presented as the all-powerful ruler to whom every other power and authority must eventually give way.

“He must reign until he has put all his enemies under his feet.” And the last enemy to be destroyed will be death. Christ represents life, life in all its fullness. And that life he wants to share with every single person.

The other two readings, however, give a very different picture of God and Jesus, who is his visible incarnation. The First Reading presents God as a shepherd. We know that sheep, which are brought out onto hillsides to graze, can wander far in search of the best grass. This would be especially true in the arid hills of Palestine. Not only that, there will be sheep belonging to other shepherds out on the same hills and they can get mixed up with each other. The shepherd then spends considerable time looking after his own straying sheep and bringing them back.

God sees himself as such a shepherd:

I myself will search for my sheep, and will seek them out.
As shepherds seek out their flocks
when they are among their scattered sheep,
so I will seek out my sheep.
I will rescue them from all the places
to which they have been scattered
on a day of clouds and thick darkness.

God is portrayed as especially interested in the sheep which have got lost.

Jesus himself will pick up this image and will call himself the Good Shepherd. He will also compare God’s concern for the sinner with a shepherd who leaves behind ninety-nine good sheep to go in search of even one which has gone astray and got lost.

But there are others who will not be so well treated. “The fat and the strong I will destroy. I will feed my sheep with justice.” God is biased. He is biased against those who exploit the weaker and poorer members in their society. Justice for God is not just based on moral rectitude. It is rather based on an equitable sharing and access to the resources available and necessary for a life of dignity and self-respect.

We remember the parable of the rich man clothed in purple and dining sumptuously every day. At the foot of his table sat a poor man, covered in sores, his wounds licked by dogs, who longed to have even the crumbs that fell from the table. Perhaps the rich man went to the temple regularly, perhaps he observed all the festivals and requirements of his religion. But he did nothing for the man at his feet. And that was his sin: he did nothing. And that in some ways is the greatest sin of all.

And that is precisely the point in the Gospel reading for today. The scene is the final judgement. Incidentally, this is not to be taken in too literal a sense. It is the meaning behind the scene which we are to focus on. It would be a worthless piece of speculation to imagine our encounter with God as taking place in any particular way analogous to life on earth. One wonders, too, if there is any real validity to the distinction sometimes made between the “particular” and the “general” judgements. The images of the Son of Man coming on the clouds of heaven with hosts of angels are typical biblical images pointing to God’s awesome greatness and transcendence and are not descriptions of some visual experience we might have.

There will be two kinds of people coming for judgement, described respectively as ‘sheep’ and ‘goats’, the good guys and the bad guys. And how are the good and the bad guys to be distinguished from each other? It is quite obvious that both groups are very surprised at the criteria that Jesus presents.

Come, you that are blessed by my Father,
inherit the kingdom prepared for you
from the foundation of the world;
for I was hungry and you gave me food,
I was thirsty and you gave me something to drink,
I was a stranger and you welcomed me,
I was naked and you gave me clothing,
I was sick and you took care of me,
I was in prison and you visited me.

Were they even more surprised at the answer they got? “Truly, I tell you, just as you did it to one of the least of these brothers and sisters of mine, you did it to me.”

Then turning to the goats, whom he calls “accursed”, he condemns them for not doing any of the things he mentioned above and for not recognising Jesus in their brothers and sisters.

There are a number of things to notice here:

· none of the things Jesus mentions are religious in nature
· there is no mention whatever of any commandments being observed or violated
· people are condemned not for doing actions which were morally wrong but for not doing anything at all
· the actions are done (or not done) TO Jesus and not just FOR Jesus. In other words, Jesus is truly present in every person I meet. I am not just nice to this person (whom I may not care about very much) in order to do a “good act” which Jesus will reward and add to my bank account of “good works”. People cannot be used – even for spiritual purposes.

To sum up, Jesus is saying that, if I wish to be counted among the sheep, then I must be an actively loving person, irrespective of the response I get to my love. This is the way God loves me. It is not enough just to fulfil obligations, religious or otherwise. It won’t do to say, “I am a good enough Catholic”. I am expected to keep going out of my way and reach out in love especially to those in need – the hungry, the thirsty, the stranger, the poor and naked, the sick and those in prison. It does not matter how they got sick (acquiring AIDS through a sexually promiscuous lifestyle, overindulgence in alcohol or nicotine) or why they are in prison (murder, rape of a young girl, terrorism…). These people are especially to be loved because they are the most in need of having their lives turned around.

This is the King I am called to serve. And the way he wants to be served is for me to be filled with care and compassion for brothers and sisters everywhere and especially for those who are farthest from him and those who are not experiencing the abundance with which he has filled this world. I serve by loving those who are materially, socially, psychologically, morally and spiritually poor.

The picture of the Judgement in the Gospel is not meant to fill us with fear and trembling. No, it is a challenge not about the future but about today. The surest way to guarantee that I will be numbered among the sheep is for me to become right now a loving, caring, tolerant, accepting person.

Help me, Lord, to seek and find and respond to you
in every person and in every experience of this day.
Grant, Lord, that all my thoughts, intentions, actions and responses
may be directed solely to your love and service this day.
Amen. 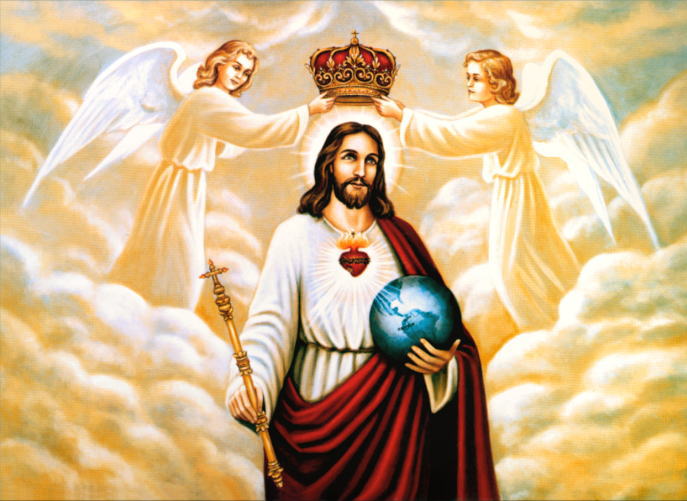