Fourth Sunday in Ordinary Time – B

I don’t know if you have watched those old black-and-white fast moving films from the time of the Second World War. Often they show Adolf Hitler addressing large crowds of people. Hitler always spoke with much authority. This has been caricatured by Charlie Chaplin in his The Great Dictator of 1940. Recently, I came upon the acceptance speech of Mother Teresa when she was awarded the Nobel Prize for peace in 1979. She too spoke with much authority. But she began her speech with the prayer for peace attributed to St Francis of Assisi: “Lord, make me an instrument of your peace!”

In the gospel passage of today, Mark tells us that Jesus “taught them with authority” (Mk 1:22), and again after the cure of the man possessed by an unclean spirit, the Gospel tells us: “The people were so astonished that they started asking each other what it all meant. ‘Here is a teaching that is new’ they said ‘and with authority behind it” (Mk 1:27). What type of authority did Jesus exercise? ‘Authority’ can be understood in different ways. When someone delivers a good lecture on a topic that they are an expert in, we could say, they are an authority on that topic. Then, there is political authority. But surely, Jesus’ authority is neither of the two, though there is some reference to his wisdom in the admiration of the people. In any case, as we see in the gospel text of today, the authority of Jesus was a life-enhancing authority. He uses his authority to bring wholeness to the man possessed by unclean spirit. He uses his authority to assure in the Kingdom of God.

All the three synoptic gospels (Matthew, Mark and Luke) speak about authority in reference to Jesus exactly in similar sequence and contexts. Let us just focus on the Gospel of Mark. Besides the first reference to the teaching of Jesus with authority that we heard read in the gospel text of today, the gospels also speak about the authority to forgive sins (Mk 2:10). In a situation of conflict with the Scribes, Jesus would assert: “the Son of man has authority to forgive sins on earth.” Jesus shares this authority with his apostles: “Then he summoned the Twelve and began to send them out in pairs, giving them authority over unclean spirits” (Mk 6:7). Despite Jesus’ generous sharing of his spiritual authority with them, the apostles began to fight among themselves for political authority. Later in the gospel, they began to quarrel among themselves about who was the greatest. “So Jesus called them to him and said to them, ‘You know that among the Gentiles those they call their rulers lord it over them, and their great men make their authority felt. Among you this is not to happen. No; anyone who wants to become great among you must be your servant” (Mk 10:42-43). So then basically, the gospel meaning of authority is a spiritual one: it is the authority to share wisdom, to forgive, and to enhance life.

Like the apostles we too are tempted so often to use authority – even spiritual authority – for our own benefits, to boost up our own egos and to lord it over others. Sometimes, even spiritual gifts could be used as a symbol of pride and dominion. It is not rare to see even some nasty competition among those in preaching and healing ministry these days. For those of us who might have leadership roles in the church the temptation to abuse authority is even more. We need to humbly accept that the more we are empty and insecure within, the more we are tempted to abuse authority – even in the name of God. The gospel message of today invites us to see that true authority is spiritual. And spiritual authority is gentle, inviting and life-giving.

The authority of Jesus that we are invited to share is not like a large imposing tree, which suppresses all other shrubs under its shadow not allowing any form of life around it. But it is like an elegant slender tree that welcomes different forms of life to thrive around it.

What does really contribute to the difference between the two types of authority – the oppressive type and the life-enhancing type? I think, the difference is simply determined by what God is for us. First of all, it is rooted in our own experience of God. And secondly, it flows from our image of God. If our experience and our own image of God are as a gentle father, then our authority becomes life-giving. I would interpret this not only as neglecting of God, but also as not experiencing the right image of God. That is why, it important to note that the source of Jesus’ authority was his experience of God – the Abba-experience.

The Source of Life-giving authority: the Experience of God

The narration of the life of Jesus in the Gospel of Mark begins with Jesus’ baptism. The baptism of Jesus, in the gospel of Mark, is seen as his Abba-experience. The voice that was heard from heaven was addressed to Jesus: “You are my Son, the Beloved; my favor rests on you” (Mk 1:11). Jesus’ experience of God as his Abba marks the very beginning of the public ministry of Jesus. And his ministry is then rendered with authority, and it is life-giving.

Jesus’ authority was like that elegant slender tree. It had its root in God. It was gentle, inviting and life-giving.

As I continue to admire the authority of Jesus, together with the crowds, my own prayer is that my ‘authority’ be not founded on books, or degrees, or my hierarchical position, but on my continued experience of God as father. And let my spiritual authority be gentle, inviting and life-giving.

At our very own baptism, God put within us His authority. He first cleansed us of our Sin, removed Satan within us and filled us with His love. Above all through our very baptism, we have received the mission to be Prophets, to speak with authority the truth and to do good to others so as to set them free. Free from darkness and selfishness. Thus when we use this authority for the good of others as Jesus, we bring eternal life to others and to ourselves.

In the Eucharist, the words of Christ over the bread and wine, transforms them into His very own Body and Blood. Let us place ourselves in close contact with Jesus, so that He too will transform our lives to spread His Kingdom. 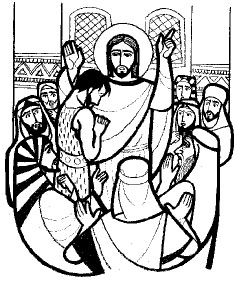 This entry was posted in English, Fr Franco, Ordinary Time, Year B. Bookmark the permalink.