Fourth Sunday of Lent – B

“God loved the world so much….”

The Gospel of John is often considered the most difficult of the Gospels – highly symbolic in its expression and deeply theological in its content.  John likes to use terms with more than one meaning and thus invite us to a deeper level of reflection. For instance, in the gospel text of today (from John 3) there are at least three expressions that can have more than one meaning: night, spirit or wind, born from above or born again.  This conversation between Jesus and Nicodemus turns out to be a theological discourse, which is very typical of the Gospel of John.  Though the text we heard read is only part of the conversation, I would like to consider the whole encounter between Jesus and Nicodemus (Jn 3:1-21), pick out three important elements, and reflect on their relevance to our life today.

We are told that Nicodemus was a Pharisee, and a leader of the Jews.  This could mean that he was a member of the Sanhedrin – the council of Jewish elders. So Nicodemus was a public person, with knowledge, influence and authority.  But why did he come to Jesus by night?  Is ‘night’ to be understood in a figurative sense that in spite of his knowledge, Nicodemus was in the dark about the true revelation of God? Or if we understand ‘night’ literally, did he come to Jesus by night because he was afraid of the paparazzi, the public eye. Did he not want to be seen in the presence of Jesus – this unlearned (?), self-proclaimed rabbi from Nazareth?  To me, both the possibilities are meaningful.

In the context of increasing secularism, we are tempted to come to Jesus “by night”.  We prefer to reduce our faith-life to the private domain.  Much like, Nicodemus we may feel shy to be associated with Jesus.  On the other hand, all our education, our scientific knowledge and the access to information might tell us the ‘how’ of things, but they are inadequate when it comes to the ‘why’ of the mysteries of life.  We are in the dark as far as spiritual realities are concerned. So we come to Jesus, even by night.

As we come to Jesus, we hear him say, “… no one can see the Kingdom of God unless you are born from above”.  This is the second point of our reflection.  John uses the Greek word, ‘anothen’, and this has two meanings: ‘again’ or ‘above’.  Jesus continues to clarify this further by saying, “in all truth I tell you, no one can enter the kingdom of God without being born through water and the Spirit…” (Jn 3:5).  Still it is not clear what is in the mind of Jesus!

There was a time when I had a discussion with someone who had been a Catholic but recently baptised into an ‘independent church’.  She was insisting that without their baptism one cannot be saved! That night as I got into bed I had this question in my mind, “God, would you reduce salvation to just water – H2O?  Whether it is the little water that is poured during the Catholic baptism… or the water in the river used by some of the other churches, water is H2O… it is matter.  Can salvation that is spiritual be reduced to something material? Next morning as I woke up there was the answer in my head.  May be it was an inspiration!  The answer was in Chapter 4 of John.  In John 4, Jesus talks about water to the Samaritan woman: water from the well, living water, and the water that wells up for eternal life! But actually there was no exchange of physical water (H2O), and yet the woman had experienced salvation.  How did that happen?

This is the purpose of the Word of God; it is the function of this Sunday liturgy; it is the role of the church: to mediate the experience of the love of God in the person of Jesus.  This experience makes us realise that we are in the image of God.  This experience makes us realize we are the children of God.  This experience brings inner peace and lasting happiness. It provides the grounding for our purpose of life. This is salvation.  This truth, which is not an intellectual knowledge, but an inner experience, sheds light in our darkness.  And thus, the last sentence of today’s gospel becomes meaningful: “the person who lives by the truth comes out into the light” (Jn 3:21).  Nicodemus came to meet Jesus by night – in his darkness of doubt and thirst.  He goes back after the encounter, living in the light, because he has experienced the love of God made visible in Jesus.

For some people, a church is a place to escape from the strains and tensions of daily life and the anguish of the wider world. They say that a church is a gathering place — where they can pull themselves together and get some assurance that God is listening and ready to heal and strengthen them. True enough.
But the cross we see each time we go to church is a reminder that this worship place is not an other-worldly refuge, not an antiseptic room where things are “pure” and where we are in another realm, aloof from human struggle and pain. Instead, amid the lovely paintings and images, the pressed altar linens, special vessels and immaculate-looking host, there is also the symbol of the cross — the cross of pain that ended Christ’s life.

At this worship, in this lovely place, surrounded by stained glass, glowing candles and images of past heroes, our saints, we sometimes have the very opposite feelings from those suggested by our surroundings. If we are in pain, discouragement, and life is messy, we might feel like aliens, tempted to think that we don’t belong amid the surrounding beauty and order — until we look at the cross.

When we make the sign of the cross upon entering and leaving church and at the beginning and end of our service; when we look at the cross that leads the entrance procession in and the procession out at the end of our Mass today, we have a vivid reminder that we don’t have to leave our pain, confusion and missteps — even our sin — at the door. Because of the cross, all parts of our lives are welcome here at worship, especially when there is pain, failure and endings.

The cross anchors us in this place. It assures us that God has not been a cool and distant observer of our lives from someplace on high, but has walked among us and joined us, from the very first breath of air of human life Jesus took in Bethlehem: to being a displaced person with his parents fleeing a hostile and murderous emperor; to living as a stranger in a foreign land; to working at a daily trade and experiencing the routine and boredom of hard work; to village life under an oppressive foreign government; to making and loving friends, enjoying food, drink and table companions; to abandonment by those who swore they would stay by him; to rejection by the religious leaders who should have embraced him; to being handed over by one of his own to be killed; to being mocked, tortured and put to death.

If we should wonder where God is in the mess of our lives, or whether the lovely, neat and orderly worship service has a place for us — as we experience the very opposite feelings — then all we have to do is look upon the cross and know that this is our home. The cross was a cruel instrument of torture and death, meant to intimidate, frighten and keep a people in submission. It was the form of death reserved to slaves and traitors, not used for citizens of the empire. The cross wasn’t just horrible for the victim to endure, it was awful for witnesses to watch. We turn out eyes away from very violent movie or television scenes; imagine the horror of looking on a dying victim of crucifixion. The cross reminded a captive people that they could be abused and tossed aside as trash if Rome thought they were insubordinate or troublemakers — like Jesus.

Jesus was a threat to the empire because he talked about a kingdom without boundaries and guarded borders; where people were equal, not a society of a few privileged citizens and the rest treated as underdogs; where people weren’t expected to fit in and be like everyone else, but where diversity was valued; where power wasn’t the instrument to exert the will of a few, but love and service would be the attraction to membership. Jesus called it the Kingdom of God, but his enemies just heard it as a rival to their own religious and political kingdoms, so they eliminated the competition.

The scriptures tell us that God used power in a different way — to love us and to show us that love by taking on the role of a servant. “For God so loved the world…,” that God held nothing back to show us that love, not even the beloved Son. God wanted Jesus’ message and example of love to be embraced by all, including the religious and political leaders. But instead, they were threatened by Jesus and they decided to stop him and crush his message.

Rather than back away, Jesus stayed with the message he began early in his ministry — as we hear today — despite the eventual opposition and threats to his life. God so loved us, John tells us, that God let Jesus be scooped up, crushed and put to death. Jesus was so convinced of God’s love for us that he went to his death proclaiming that love. Now, anyone looking on the cross would know God’s determination to show us how much God loves us. Even from the cross Jesus continued to proclaim God’s love for sinners when he forgave the thief crucified next to him and his executioners.

When the cross was over and Jesus dead, the evil and disruptive forces seemed to have the final victory — as they still seem to do. People’s hopes were crushed one more time. It looked like nothing would change the same old dominant forces and patterns of evil. People again seemed caught in a downward spiral, again dragged lower and lower. Then at the very lowest point in their lives — for what could be worse than hopes dashed (?) — with his followers huddled in fear, Jesus appeared, raised from the dead and offered what he promises today: “…that everyone who believes in him [the Son] might not perish but might have eternal life.”

We are in the midst of Lent. Through this season of grace we hear again and again the words Jesus spoke on the first Sunday of Lent, “Repent and believe in the gospel. (Mk 1: 15)” And that is what we are trying our best to do — to turn away from our sin and turn more fully to the grace God is offering us in Christ. Lest we think this work of conversion is ours to do on our own, Paul reminds us today that it is by God’s grace we have been saved — and are being saved. If we have any doubts about God’s intentions and how much God is reaching out to us in love, we have only to look up at the entrance process of today’s mass — it is being led by the cross held high. 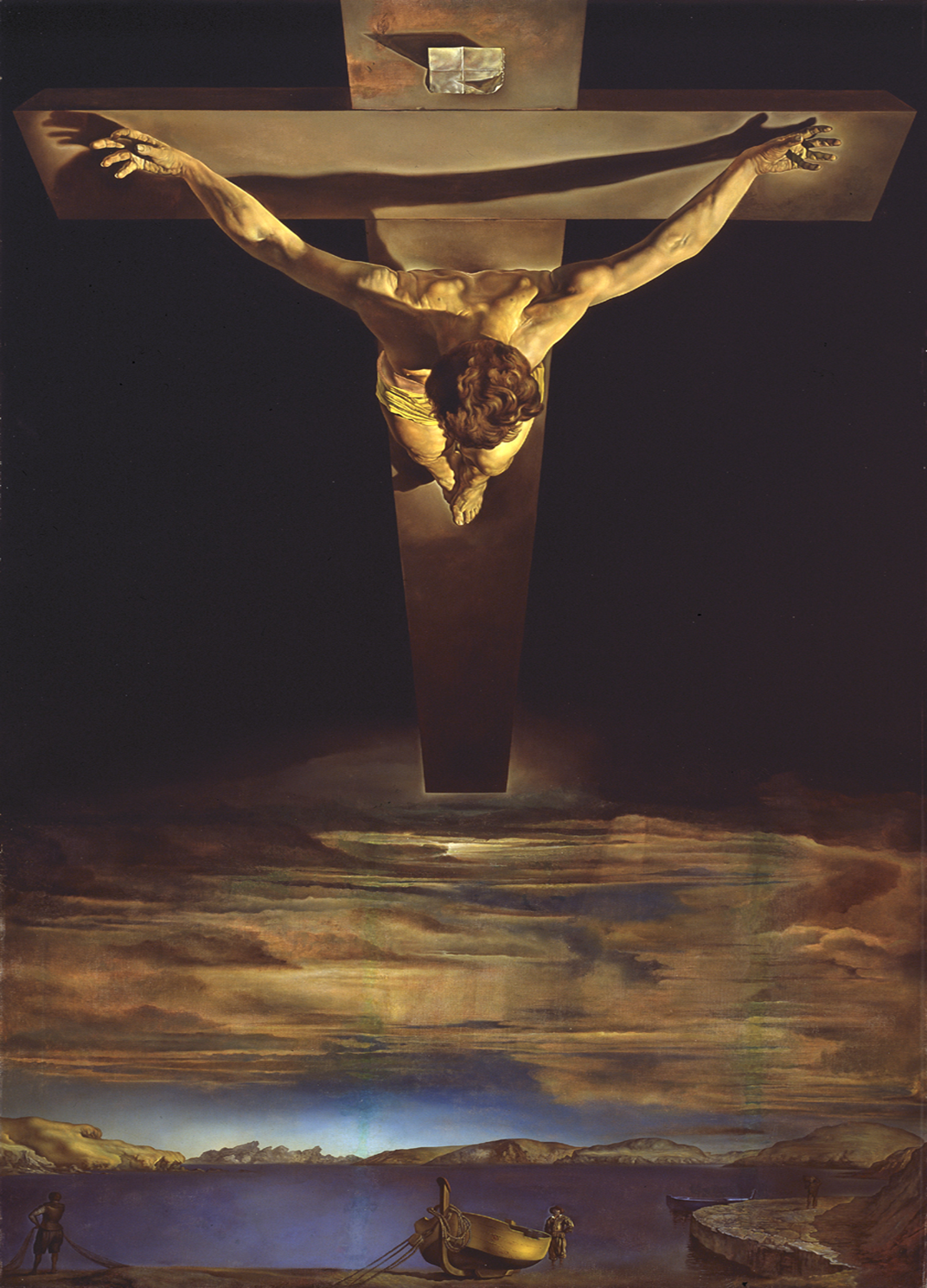 This entry was posted in English, Fr Franco, Lenten Season, Year B. Bookmark the permalink.