Solemnity of the Most Holy Trinity – B

God in Three: Our experience of the Divine

At the recommendation of a friend of mine, a few months back, I ventured to read, The Shack.  With over 10 million copies in print, and raising a lot of questions among the churches, the book had become controversial. Here is the story-line in brief:

Mack, the main character of the story, receives an invitation from ‘Papa’ to visit the shack – a hut in the forest.  From his scanty religious background, Mack knows that Papa is God himself. Four years prior to this invitation, Mack had lost his daughter Missy from a camping site.  Since then he had been overcome by, what he calls, “The Great Sadness.”   He decides to respond to the invitation and spend the weekend at the shack.  What he encounters at the shack are the manifestations of the three persons of the Trinity. God the Father takes the form of an African American woman, who calls herself Elousia, or just ‘Papa’; The Son is a Middle-Eastern carpenter; and the Holy Spirit physically manifests itself as an Asian woman named Sarayu.  In that encounter with the Trinity, Mack is helped to deal with “The Great Sadness” of the loss of his daughter, and to forgive the killer of his daughter.  And in the process, Mack learns a few hard lessons about God, suffering, and life itself.  His daughter is not brought back to life, but the Trinity restores life and wisdom to Mack.

To me, this is a modern parable.  Every analogy has its limitation, particularly those that talk about God. For sure, The Shack has its problem areas! According to legend, St. Patrick used the 3-leaved shamrock to explain the Holy Trinity to the Irish people.  I suppose, even the shamrock does not capture the mystery of the Trinity adequately.  So are all analogies. They are limited. But what I liked most about The Shack is that it invites us to experience God in a different light, and to enjoy the fruits of that experience in terms of wisdom and wellbeing.  This is the invitation of the feast of today.  This is the invitation of the Trinity: to experience Him as the Living God, as one who creates us, seeks us out, and enlightens us.

The key point is: our belief in God as Trinity is not just a line in the Bible, nor is it a mere answer to a question in the catechism.  Our belief in God is an invitation to experience. And Trinity is the way we experience God the mystery, in His different dimensions. We might lose the significance of the mystery of the Trinity, if we just fossilize that mystery in a dogma and think we know it all.  This complacency is what was challenged by the legendry story of St. Augustine walking on the beach and finding the young boy trying to pour the entire ocean into a tiny hole on the shore. What this legend and, in a limited sense, The Shack, are trying to do is to invite us to be open to the varieties of ways we experience God.  The Trinity is a model that captures the three ways God has been experienced in history, or the three ways He has revealed Himself.  It also reminds of the three ways in which we – as individuals and communities – might experience Him today.

On the last of his voyages to the American continent Christopher Columbus ran into a hurricane, a terrific storm at sea that tossed and turned his boats. Many of the sailors became extremely ill; all were terrified. Columbus went to the bow of his boat. He drew his sword from his scabbard and with it made the sign of the cross on the mounting waves.

Suddenly the storm began to subside and the waves lost much of their momentum. The sign of the cross is but a simple sacramental in the church. Yet it is a most powerful prayer.

The sign of the cross expresses our belief in two of the most important mysteries of our faith- our Redemption and the Blessed Trinity.

All our liturgical prayers, all the sacraments begin and end in the name of the Trinity.

Today we celebrate the feast of the Blessed Trinity. Matthew 28:19 provides the comprehensive text on the Holy Trinity in the New Testament. During the course of the final meeting with Jesus in Galilee the ascending Jesus gave the disciples the great missionary command, “Go therefore and make disciples of all nations, baptizing them in the name of the Father and of the Son and of the Holy Spirit.”

Today on this feast day, there is one way that we can all go out to be His disciples and make disciples. The way is, the sign of the cross that we make.

The sign of the Cross, when done well and in deep reverence is a way of not taking the Lord’s name in vain. It helps us to really acknowledge in our life the Blessed Trinity, by doing it slowly and in doing the right action. The Trinity helps us to acknowledge that God is the source of everything, the head from whom all good things come. The Son is the one who came to teach us the love of the Father and to express His tangible love for whole of creation, especially we humans by shedding his body and blood for each of us; and we acknowledge the Holy Spirit by doing the actions that God wants us to do with the promptings of the Spirit. To use our limbs and body to go and to proclaim this love of God to others. Thus finally when we say ‘Amen’, we affirm that we believe and so it is true.

The doctrine of the Most Blessed Trinity is the central point of Christina faith and life. It is the mystery of God in himself, it is therefore the source of all the other mysteries of faith. The whole history of salvation is identical with the history of the way and the means by which the one true God, Father, Son and Holy Spirit reveals himself to men and reconciles and unites with himself those who turn away from sin (CCC 234).

Christianity teaches us that salvation is a “group affair.” No one is saved because he or she has developed an intense personal relationship with God while ignoring the rest of the human community. In Christianity “to be saved,” and “to be fully human,” include the development of authentic relationships with other persons.

Thus it is mystically fitting, then, that the God of the Christian Scriptures is not an “isolated individual”? Our God is a Trinity, a mysterious blend of Three Persons. The very nature of goodness, therefore, implies “interpersonal relationships,” some sort of inner communication within the very substance of the divine. We cannot really explain the Trinity. 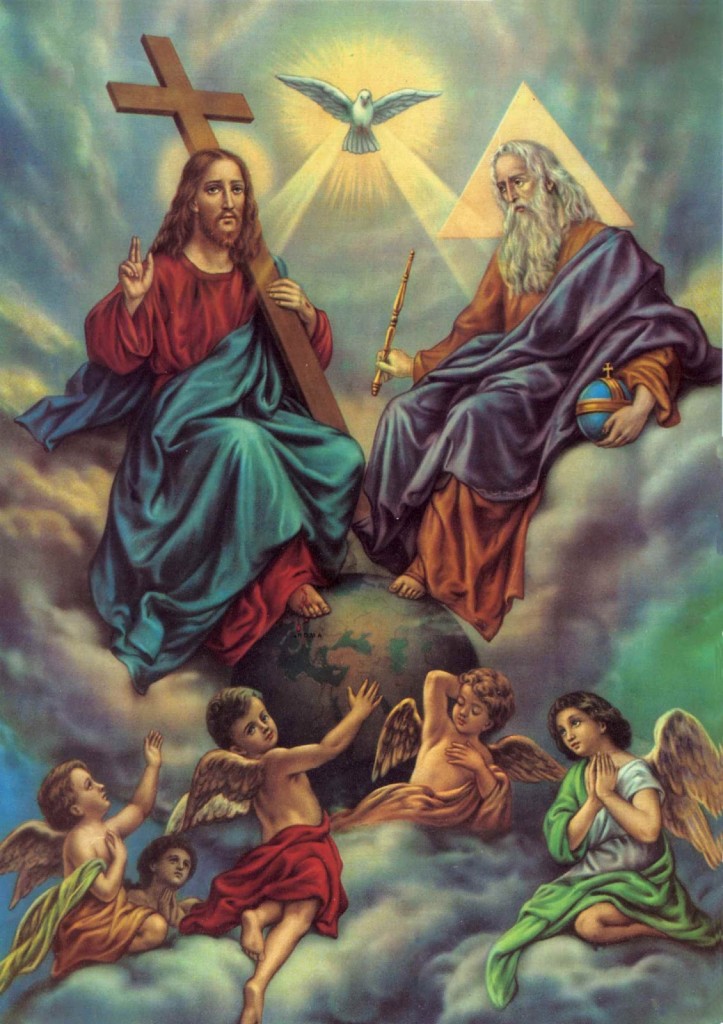 This entry was posted in English, Fr Franco, Ordinary Time II, Year B. Bookmark the permalink.