As Christians, we are called to be different. Different not necessarily in our dressing, or in our food habits, but different in the way we live our lives. Our lives should be governed by love. Love that is manifested in the way we reach out to others in their difficulties, in our forgiveness, in our generosity, patience and understanding. Jesus challenges us to be merciful as our heavenly father is merciful. Our Righteousness should supersede those of others. For the times we have failed in our commitment to love others, let us ask God to forgive us.

“Is that not unfair?” queried the devotees. “It may appear unfair,” said the Sage, “but the chopped pieces of Sandalwood are rubbed to make a paste and this paste is applied on the forehead. The Axe, blunt after having cut the tree is put into the fire till red hot and beaten to make it sharp again. We are very often dissuaded from the good path, because of the injury, we sustain at the hands of those who are bad. But as the sage explained so beautifully, the good never stops giving freely of their fragrant action, even though the bad hurt them. But then good is always rewarded. And the bad are always punished.

This is precisely what the scriptures are challenging us to do. Irrespective of the type of reaction or response we receive from others, we are to constantly spread the fragrance of the good. In the first reading, Saul is jealous of David and can’t bear his popularity. He wants to destroy him. So, he goes with 3000 men to kill him. It so happens that David providentially gets an opportunity to kill Saul. But he does not do so. On the contrary, he spares him. He does not pay evil for evil. Here we find an example of fragrance of a good act, just like the fragrance of the Sandalwood tree.

What is characteristic of Christian ethics is not mere “Love” but love for the enemies. Christian love is a universal love, which excludes on one. It is similar to the love of the heavenly father. The word “enemy” used by Jesus is very forceful and may very easily be misunderstood. We hear some people say, “I have no enemies”. My enemies are those who accuse me, hate me, speak evil of me, even those towards whom I have an aversion. Jesus wants our interior attitudes to be expressed by our external deeds. Love for the enemies must be shown by positive action, like showing the other cheek, giving your coat, being generous to the beggars and thieves.

As disciples of Jesus, as Christians, we have to be different. What should differentiate Christians from others? The call to love those who do not love you. Jesus wants our love to go beyond all our natural communities- our family, our nation, our race, our caste. Christian love has no boundaries. Jesus says those who love their enemies will be rewarded, just like the sandalwood tree, which gives off its fragrance freely, it finds its place on the forehead. We will be called sons and daughters of God.

Do we live according to the Gospel? Do we love our enemies? Do we have the strength to bear with the evil, to do good to those who hate us? Jesus not only promises, “You will be sons and daughters of the Most High”, but also gives us the strength to accomplish it. If we follow what Jesus is telling us, we can hope for a better world, a world with God, a life filled with the Spirit of love, goodness, joy and peace. The Eucharist we celebrate is an invitation to share in this very life of Christ who taught us to love even our enemies and do good to those who hate us. May the Eucharistic Lord strengthen us to do the same in our lives.

Today’s first reading from the Book of Samuel tells us the dramatic story of Saul and David. David loved his father-in-law Saul but Saul was given to melancholy and depression and was jealous of the capabilities and bravery of David in battle, so Saul sought to kill David who was on the run. Yet in spite of being exiled and hunted everywhere David still loved Saul and never sought to harm him. In today’s reading David steals into Saul’s tent and finds him asleep, his spear struck in the ground besides him. David’s companion offers to kill Saul with his own spear. But David commands him to leave the Lord’s anointed in peace. David takes the spear and the pitcher of water from besides Saul’s head. Their absence he hopes will speak its own message. Saul is puzzled and surprised by David’s loyalty and his refusal to treat him as an enemy.

Like David we are constantly confronted in daily life by people whose bad behavior tempts us to retaliate in the same measure. The one thing today is measure for measure. Show them that two can play the game! Bring them down a peg or two and make them realize that the shoe is on the wrong foot. If you found out that your neighbor was blatantly telling lies about you, not to one but to many; not once or twice but often, not in small matters but in matters that affect your livelihood, what would you do’ Confront your neighbor’ Retaliate’ Take your neighbor to court’ What is the Christian called to do’

Corrie Ten Boom was a Christian Jew living in Holland during the Nazi occupation of that country. In one of her books she tells the story of what happened to her and her family. One night a man came to their door in great panic and terror. He told them that he himself and his family were going to be taken away by the Nazis. The only hope that he had was that he might be able to bribe the police, and they might be left unharmed. He begged for some valuable object to effect the bribe. He was given whatever they could possibly give, and then he left. It was a trick because he went straight to the Nazi police and reported them for assisting in his proposed escape. Corrie and all her family were arrested, and they ended up in a German concentration camp. All her family died there, and she was the only survivor. Later when she returned home, she spent a considerable length of time tracking down the man who had betrayed them. She eventually did so. Her only reason for wanting to meet him was that for her own peace of mind, she needed to forgive him. She felt that it was only through forgiveness, and not through resentment, that she could continue to live in freedom. [Jack McArdle in ‘And that’s the Gospel truth’]

In the second reading Paul presents before us the choice we have to make of choosing between two Adams. Just as the first Adam is the source of natural life, so the second Adam, the risen Christ, is the source and also the model of spiritual life. We all know that both these personalities are struggling in us. If we live purely natural lives, if we prefer to act according to worldly standards then we can’t aspire to the Christian life. Jesus is not just alive like the first Adam but the life-giving source for all who believe in him.

In today’s gospel of Luke, Jesus issues four commands: “Love your enemies; do good to those who hate you; bless those who curse you; pray for those who maltreat you.” Jesus rejects a culture of violence characterized by a tit for tat mentality and proposes instead a strategy of breaking the cycle of evil by doing good. We know that Jesus not only proclaimed these ideals but lived them in his own life. Jesus ate with and reached out to the Pharisees who opposed him and gave himself to those who begged for healing and forgiveness. Only in Luke does Jesus, at the moment of his arrest, heal the wounded servant of the high priest, while calling for an end to any violent resistance; the dying Jesus prays, “Father forgive them for they know not what they do.”

Jesus does not ask his followers to fall in love with their enemies ‘that would be wholly unrealistic. The followers of Jesus are challenged to be determined about their enemies welfare, to be stubbornly gracious and to refuse to pay back violence with violence. Hatred can only be defeated by love; injury can only be healed by forgiveness; evil can only be controlled by goodness. Unfortunately, these are qualities relegated to the margin of Christianity. In 1927 Mahatma Gandhi, addressing a Christian group said: “If I had to face only the Sermon on the Mount and my own interpretation of it, I should not hesitate to say, “Oh yes, I am a Christian”‘ But negatively I can tell you that much of what passes as Christianity is a negation of the Sermon on the Mount.” It is a sad indictment of Christianity. Christianity has often fallen victim to the temper of its time and circumstances, because it is so often difficult to overcome difference with kindness, and even the Church chose instead (for purity of faith) for centuries to ostracize, excommunicate, imprison, torture and execute. John Paul XXIII once said “Opposed with benevolence, often, errors vanish as quickly as they rise, like fog before the sun”

Some may be surprised that the Golden Rule is the heart piece of other religions too. Buddhism says “Hurt not others in ways that you yourself would find hurtful” (Udhana Varga 5, 18) Confucius the Chinese philosopher, about 500 years before Christ said, “Do not to others what you would not have them do to you” (Anaclets 15, 23). Hinduism says, “do naught to others which would cause you pain if done to you” (Mahabharata 5, 1517). Taoism says, “Regard your neighbor’s gain as your own, and your neighbor’s loss as your own loss” (Tai Shang Kan Ying P’ien). Islam says “No one of you is a believer until he desires for his brother that which he desires for himself” (Sunnah) The Jewish Talmud says “What is hateful to you, do not to your fellow man” (Shabbat 32id). But Jesus is unique in teaching that ‘others’ includes everyone created by God including enemies.”

As God forgives you I forgive you!

Before the Stalin takeover, the Nazis had their Jewish holocaust in Rumania. In talking with a Nazi soldier, Richard Wurmbrand, a Christian convert and Lutheran minister learned that this was the very man who killed his Jewish wife Sabrina’s entire family. Sabrina was now a Christian. This Nazi did not believe in either guilt or forgiveness. So Richard brought his wife Sabrina to this man and told her what he had done to her family. Sabrina embraced the Nazi, kissed him and said: “As God forgives you, I forgive you.” Sabrina could do what seems impossible to us because she believed in Christ’s words in today’s gospel: ‘Love your enemies and do good to those who hate you.’ Her own husband was unfaithful to her at one time. Although she condemned his infidelity, she would not condemn him. The Nazi soldier had killed her parents, three brothers and two sisters. To his utter amazement, Sabrina did not demand revenge. Instead she disarmed him with her forgiveness. Sabrina wanted nothing but the best for her husband Richard and for the soldier, their reconciliation and healing, a new vision and direction and a place in God’s kingdom. [Albert Cylwicki in ‘His Word Resounds’]

May we be witnesses of his forgiving love to all who hurt us! 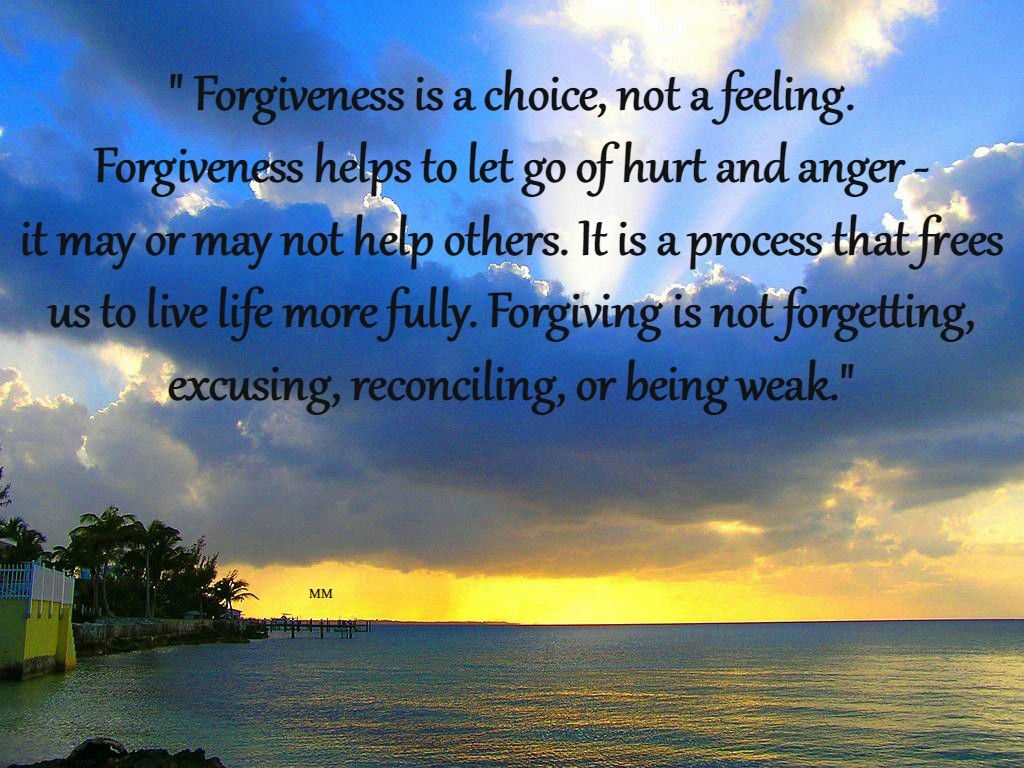