We say the Season of Lent lasts forty days, as the Latin word, ‘Quadragesima” suggests. When I was a young seminarian – skeptical as I was – I took the calendar and wanted to make sure for myself if there were indeed 40 days from Ash Wednesday to Easter Sunday. To my surprise, I found there are actually 47 days. I had reasons to be skeptical, after all! So I had a question for the teacher of liturgy, who, of course, was taken by surprise. Later he came up with a meaningful explanation: even on Sundays in Lent, we celebrate the Resurrection of the Lord, as we do every Sunday; and hence they are not counted as days of fasting and penance. So Lent does have forty weekdays of fasting and penance!

‘Forty’ is symbolic of a generation, a lifetime. The people of Israel walked in the wilderness for forty years (Dt 8:2). Practically, it was a new generation that entered ‘the Promised Land’ (Num 32:13). The number forty symbolizes a time of prayer, as the duration that Moses spent in communion with God on Mount Sinai (Ex 24:17-18; 34-28). It symbolizes every person’s journey to the mount of God as Elijah “walked for forty days and forty nights until he reached Horeb, God’s mountain” (1Kings 19:8). It is this journey that the Season of Lent reminds us of! It is the nature of this journey that the gospel reading of today narrates to us from the life of Jesus.

Every year on the first Sunday of Lent the liturgy of the word invites us to meditate on the temptations of Jesus. The synoptic gospels (Mk, Mt, Lk) capture at the beginning of the public of ministry of Jesus what John narrates as a lifetime of discernment of the will of the Father (read Jn 6:15, 30-31; 7:3). The narrative of the temptations of Jesus in the synoptic gospels resembles those of the people of Israel in the wilderness. On another level, in Jesus “we have one who in every respect has been tested as we are, yet without sin” (Heb 4:15). Therefore, the temptations of Jesus are also our own. The gospel of today reminds us that the journey of our life is often marked by trials and temptations, even as the Spirit leads us forward.

“Man does not live on bread alone”: The pleasure that goes beyond that of the body!

The first test for the people of Israel in the wilderness was hunger (Dt 8:3). This was soon after their miraculous crossing of the Red Sea (Ex 16). When they experienced hunger their temptation was to go back to Egypt, where, they said, “we used to sit round the flesh pots and could eat to our heart’s content!” (Ex 16:3). Their perception of the traps is reversed. They see the freedom of being in the presence of God as a trap! The Lord God reminds them that he is capable of giving them bread from heaven, but man does not live on bread alone.

Today, we live in a world of KFCs and McDonalds. Our high streets are full of body-shops! Our culture is one of exposure. It is so physical. It revolves around the body. It exaggerates the role of PLEASURE! This season of Lent reminds us that we are not just the body. Our hunger is not just that of the body. Our hearts yearn for the beyond. “Our hearts are restless, till they rest you.” Therefore, we do not live on bread/pleasure alone! We need to feed our souls too!

“Worship the Lord your God, and serve only him”: The possession that is beyond the world.

The Lord God desired to lead the people of Israel to the Promised Lord – which was a symbol of the covenant between the Lord God and the people. The Promised Land was a symbol of total communion with God. The people focused on a physical land, which was not yet in view (even to this day)! It seemed a mirage. Even as Moses was on Mt Sinai, the people of Israel turned aside from the way the Lord had led them through. They worshiped a golden calf (Ex 32:8). The Lord God reminds them, I am the Lord your God, and you shall “bow down in the sight of the Lord your God” (Dt 26:10) – as we heard read in the first reading of today.

When faced with a similar situation, Jesus chooses to worship the Father, not any other substitute! Despite the promise of possession of “all the kingdoms of the world”, Jesus prefers to be simple. He invites us to worship that to which our heart is ultimately directed: God alone!

It is interesting to note that at the financial district in New York (Wallstreet) stands a charging bull! The bull is the golden calf of today’s culture which is centred around money-profit-possessions! The temptation to worship other gods is so strong in our contemporary culture. I hear many smart young people boast about their investments in stocks! I hear my fellow priests talk about their money lending and borrowing (supposedly for the sake of the Kingdom!). The bull! The golden calf! In this context, this season of Lent invites me to focus on God, and only HIM!

“Do not put the Lord your God to the test”: The Power that is beyond magic.

Having been fed with the manna, the people of Israel presumed that they had the right to demand from the Lord God whatever they wanted. They demanded that God prove that he cared for them by meeting all their needs. Faced with thirst, they demanded water. And when the problem was not immediately solved, they question: “Is the Lord among us or not?”(Ex 17:7). And Moses reminds them, “Do not put the Lord your God to the test, as you tested him at Massah” (Dt 6:16).
Often we hear preachers say, “Faith is taking a blind leap!” Is that so? Is Jesus’ unwilling to take that leap from the pinnacle of the temple the lack of trust in his Father or is it the ultimate expression of faith? God does not have to show he cares for me just through magical powers. I do not have to condition God even with my faith. I do not have to put the Lord to test.

Today there is a tendency in some churches towards an exaggeration of magic and miracles. And the desire to exert power in the name of faith. Preachers become billionaires forcing people to offer their tithes to ‘god’ in exchange for miracles. Absence of miracle is taken to be lack of faith or the effect of sin.

The season of Lent invites me to sing: 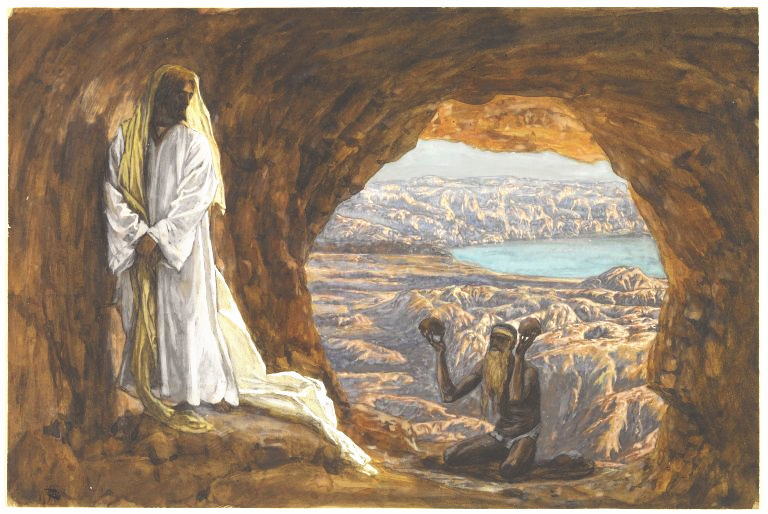