Jesus has given us His all:
– Soul to His Father
– Body to Joseph of Arimathea
– Clothes to the soldiers
– Mother to John
– PEACE to his disciples

He gave them the best and the most needed: His Peace!
Opposite of Peace is war, hatred…

To resolve conflicts,
– the best way is by clinging on to Jesus
– to remain in His love and to love one another.

The former President of India, A P J Abdul Kalam while inaugurating the 160th year celebration of St Joseph College Trichy, Tamil Nadu in India (20 Dec 2003), he had spent 35 minutes talking to students on various topics. In the end he made the entire gathering stand up and repeat the prayer: “Lord, make me an instrument of your peace!”

There is so much of violence, hatred, wars that is going on all around us. The vocation of a Christian amidst all this is to bring peace. Why is it so? Because Christ has offered his followers his own peace. “Peace I leave you, my own peace I give you.”

Once an author was watching some children at play. He asked them what they were playing and they said ‘we are playing WAR’. He asked them Why? It is such a horrible thing! Why don’t you play peace sometimes?’ They discussed and after long silence, one boy asked the author, “Mister, how do we play Peace?”

The greatest gift of the Risen Lord is His Peace, he came for peace. One such man who played peace was St Francis of Assisi. The canticle of Bro Sun sister Moon; Make me an instrument of your peace, where there is hatred let me sow Peace.

We cannot play peace, unless we ourselves are at Peace with God and self.
Peace can come to us, only if we cling on to Christ. Receive His Peace and let Him abide in us.

The Eucharist is this great occasion and moment in our life, where we constantly not just receive the Peace of Christ…but His very nature. Let us as we receive the Prince of Peace in holy communion, let our prayer be like St Francis of Assisi:

The Prayer of St. Francis

O Divine Master,
Grant that I may not so much seek
To be consoled as to console;
To be understood as to understand;
To be loved as to love.
For it is in giving that we receive;
It is in pardoning that we are pardoned;
And it is in dying that we are born to eternal life.

A few years ago the Vietnamese Cardinal Joseph Xavier van Thuan died in Rome, exiled from his homeland.

Everyone who knew him during the last years of his life was impressed by his interior peace and joy.

He was someone who had found Christ’s peace, the stability that comes from discovering and clinging to the deeper truths.

• Before his exile he was serving as Archbishop of Saigon.
• After the Vietnam War, when the communists took over both North and South Vietnam, he was arrested by the communist authorities.
• He spent the next 13 years in prison, as the communists tried unsuccessfully to destroy the Catholic Church in that country.
• Nine of those years were spent in solitary confinement, in gruesome conditions and horrible privations.
• At first the authorities decided to have only two guards watch over the Archbishop, so as not to risk contaminating too many young soldiers with the Archbishop’s Catholic ideas.
• But after a month, Bishop van Thuan had made friends with both of them and taught them some Christian hymns and prayers.
• The officials were forced to rotate guards every week in order to avoid such embarrassing conversions.
• But the rotation strategy backfired. The holy bishop radiated Christ’s goodness so powerfully, even in the midst of his emotional and physical suffering, that he would win over his guards without even trying, sparking their curiosity and interest in his “secret” – that is, his faith.
• In the end, they went back to assigning two permanent guards. It was better to lose two than twenty.

That’s the kind of interior strength and peace of mind that Christ wants to give us.

Oceans and trees give secret to peace.

We have all heard the proverb, still waters run deep.
• It’s true for lakes and oceans, but it’s also true for the spiritual life.
• The deeper our friendship with Christ, the more stable our lives become.
• Even when storms come and make waves on the surface of the ocean, the depths remain calm.
• Christ wants us to learn to live a deep spiritual life, so that we can experience profound interior peace.

There is a similar analogy with trees.

• This is because their roots spread out horizontally, just barely under the surface of the ground.
• This type of root system helps pine trees survive in their native higher elevations, where there is only a thin layer of soil over the rocky ground.
• But it makes the trees vulnerable.
• When high winds blow or storms break, they are easily uprooted.

Oak trees, on the other hand, are famous for their sturdiness.

• They stand tall and strong while storms and wind wreak havoc with the other trees around them.
• White Oak trees consistently resist even tornados.
• Why? Their root system is different.
• They put down a deep tap root – a single, thick root that goes straight down into the soil and serves as an anchor.
• If you plant a White Oak tree acorn, it will grow its tap root down into the soil for almost an entire year before you see even a tiny sprout on the surface.

When our lives are deeply grounded in the soil of Christ’s love, mercy, and mission, they become strong and fruitful.

The tap root of friendship with Christ brings interior peace even in the midst of life’s biggest storms. 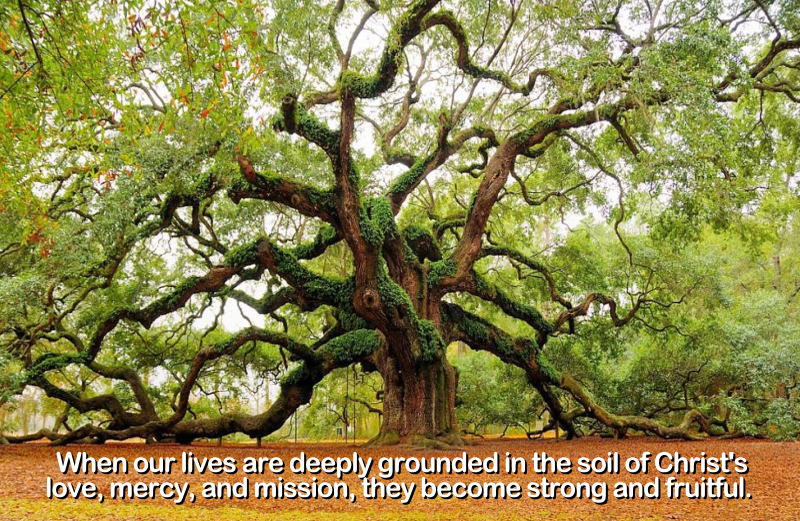