Solemnity of the Ascension of the Lord – C

Eyes Fixed on Heaven and Feet Firm on the Earth

Luke tells us in the Acts of the Apostles (Acts 1:3) that Jesus was seen in his risen form for forty days. After those forty days, Jesus was no more seen in his risen body. The feast of today marks this stage of transition in the story of incarnation and resurrection – that Jesus is not visible in his earthly body as such. Luke describes this “withdrawal” of Jesus (Lk 24:51) in terms of being “lifted up” (Acts 1:9). And Mark describes it in terms of “being taken up into heaven” (Mk 16:19). Hence, “the ascension” of the Lord! However, with our modern familiarity with rocket science, we shouldn’t be led to think of the feast of today in terms of a count down and then Jesus being shot up to heaven! That would deny this feast of its depth. Therefore, my reflection is not going to be on the hydraulics or aerodynamics of the feast of today!

In my reflection, I would like to focus on two phrases from the first reading of today which capture two important dimensions of our Christian life, namely, we have our eyes fixed on heaven but at the same time we have our feet firm on the ground.

Eyes Fixed on Heaven: “He was lifted up while they looked on” (Acts 1:9)

There is a funny story about a man, who when he was in his twenties, walking along a city street, had found a hundred-dollar bill. Since that day, the man decided to always look down expectantly as he walked on the streets. By the time he reached the age of seventy, he had gathered quite a lot of stuff: he had found hundreds of wallets with credit cards and IDs; the money that he had collected would have amounted to thousands of dollars. If he had collected pins and bottle-tops they would have filled truck loads. From time to time he gathered some valuable stuff: he had picked up at least ten mobile phones and i-pods, and such things. But above all, he also ended up having a hunch-back!

The feast of today invites us to look up. To have our eyes fixed on heaven – this is the first aspect. Luke tells us in the gospel: “Then he took them out as far as the outskirts of Bethany, and raising his hands he blessed them. Now as he blessed them, he withdrew from them and was carried up to heaven” (Lk 24:50-51). He goes on to add in the Acts of the Apostles, as we heard in the first reading of today, “As he said this he was lifted up while they looked on, and a cloud took him from their sight” (Acts 1:9). What does this really mean?

This description of Luke reminds us of what happened in the Hebrew Scriptures. The Second Book of the Kings (2King 2:9-15) tells us how one day Elijah was with his disciple Elisha near the river Jordan. Suddenly there appeared a chariot of fire drawn by horses of fire. Elijah was taken up in a whirlwind as Elisha looked up to heaven. From that time Elisha received the spirit of his master and was empowered to continue his mission in the world. In fact, from then on Elisha was able to perform the same deeds as his master.

Luke reminds us, through his own narration in the readings of today, that we will be empowered by the Spirit to do the same things that our Lord and master Jesus performed. In similar words, St Paul, writing to the Colossians, assures them – and us: “Since you have been raised up to be with Christ, you must look for the things that are above, where Christ is, sitting at God’s right hand. Let your thoughts be on things above, not on the things that are on the earth, because you have died, and now the life you have is hidden with Christ in God. But when Christ is revealed…, you too will be revealed with him in glory” (Col 3:1-4). That is why, in the gospel of today, Luke tells us that after the parting of Jesus his disciples “went back to Jerusalem full of joy” (Lk 24:52).

This first dimension of the feast of today is very well captured in the opening prayer of the liturgy of today, that we have prayed:

Gladden us with holy joys, almighty God,
And make us rejoice with devout thanksgiving,
For the Ascension of Christ your Son is our exaltation,
And where the Head (Christ) has gone before in glory,
The Body (we the church) is called to follow in hope!
Feet Firm on the Earth: “Why are you standing here looking into the sky?” (Acts 1:11)

Looking up to heaven is not to be an escapism from life. The disciples are told in the Acts of the Apostles, “Why are you Galileans standing here looking into the sky? This Jesus who has been taken up from you into heaven will come back in the same way as you have seen him go to heaven” (Acts 1:11). They can’t possibly be “witnesses not only in Jerusalem but throughout Judaea and Samaria, and indeed to earth’s remotest end” (Acts 1:8), if they kept standing there just gazing at the sky. The disciples’ belief in the Risen Lord, the power of the Spirit, and their hope in the second coming of Jesus have to be expressed in their commitment to transforming the world. Yes, they need to have their feet firm on the earth.

Elsewhere Jesus had told us: Blessed are those servants that the Lord, on his return, will find busy at work serving their brothers and sisters (Lk 12:35-48). And during the transfiguration of the Lord, when Peter wanted to pitch tents on the mountain-top lost in the clouds, Jesus brought them down the mountain, back to the humdrum of daily life (Lk 9:28-37). Moments of looking up to heaven, being on the mountain-top, experiences of being elated are necessary and important in our lives. They are moments of grace. However, the fruits of those moments are truly expressed in the plains of daily life. People of faith also have their feet firm of the earth.

Once I was sharing with my Jesuit spiritual director, how I want to avoid administrative jobs and responsible positions in my religious order. But he said, this may not be a sign of holiness, after all. He went on to add how efficient administrators were most of the founders of religious orders. For instance, Ignatius of Loyola, for all his deep spirituality was also an efficient organiser and planner. I know, this was true of my founder Don Bosco – how practical a person he was. More recently, we have seen people like Blessed Mother Teresa of Calcutta, who were able to combine their spirituality and the practicalities of founding institutions.

Of course, as Christians we are not lost in the narrow confines of this world. We have a sense of upward and forward looking hope. At the same time, we are ‘not lost in the clouds’. At the end of the day we have to pay our bills. Yes, genuine holiness consists in the meaningful integration of the spiritual and mundane aspects of our daily life.

As Jesus ascended into heaven, an angel approached Jesus and asked Him: ‘Did you convey to your ABBA the good news?’ ‘Not fully, but in a way. I have given the good news to the 12 men on earth. Majority of them are simple fishermen, one a tax collector, a zealot…’ Hearing this from Jesus, the angel laughed and went away, wondering how this good news will spread.

Jesus; He does not call the qualified, but qualifies the called. His trust in each one of us is immeasurable. His faith in us is tremendous.

Looking up is sometime very tiresome. This happens to me very often while watching the sky or high rise building. Looking down later on gives me comfort to look ahead and carry on with my work and walk.
The feast of the Ascension is where the disciples were looking up. However later on they were told to go and carry on their mission (look down). Thus we can say; Looking up is Ascension and looking down is mission.

Keep our eyes fixed on the Lord (Heaven); but our feet on His mission (for this we need the Holy Spirit).
The disciples followed the Lord Ascending into Heaven with their eyes since they could not with their feet, and although human vision failed to catch the savior, nonetheless faith’s devotion did not fail.

When we are in a dense forest and look up, we are not able to see anything above. However as we climb up the forest we are able to see full view and want to continue to be there. Later on we have to leave to go back to base, but now a happier feeling that it is not just forest around, but there is something brighter and beautiful up there; and this gives us energy to continue to work below.

Leonardo da Vinci while working on a canvas painting he left the work incomplete and asked his students to complete the same. They were not ready from their part to touch the great painting already started by their master. Da Vinci said to them, “Will not what I have done inspire you to do your Best?”
The feast of the Ascension is like this, where Christ who began His Father’s mission here on earth has given us to complete the same in the best way we can. Our humble task is to carry on the task given by Jesus to each of us. Christina vocation is to spread the Good News. It is like the baton we need to later on hand over to others, like it is done in a relay race, so as later on to achieve the goal. Ascension is our ultimate destiny; to be with God. Jesus is the one who has shown us the way (I am the way, the truth and the life).

The Holy mass that we celebrate, we affirm this tenant of faith while we say the creed. Let us make a conscious effort to pronounce it. We get the strength from the Holy Eucharist. Jesus is always present with us, guiding us, instructing us, motivating us, to complete and do our best, and finally to be where He is.
We do not have to look up, He is here with us, on the altar, in our hearts and in our brothers and sisters, strengthening our feet to carry on our Christian vocation. 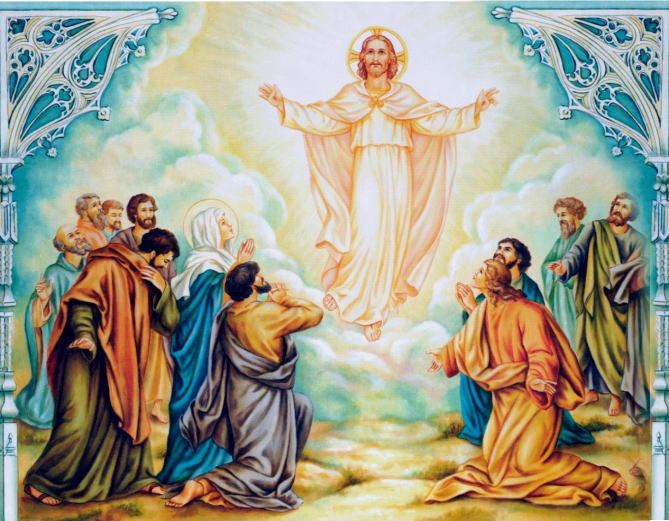