Moved with pity… he went up and bandaged his wounds

In the parable of today, a traveler, assumed to be a Jew, is attacked by robbers on the road between Jericho and Jerusalem. A Priest comes along, he does not help. Then comes a Levite, he too does not help. Both, the Priest and the Levite, have their reasons not to reach out to the wounded man who is now lying like a corpse. Touching him would defile them and render them impure to minister in the temple. They are following the directives of the law. Remember, it is a lawyer who has asked Jesus the question: “Who is my neighbor” (Lk 10:25,29). In the mind of the Jewish listeners (yes, and in the mind of the lawyer, for that matter) the next to appear on the scene should be a Jewish layman. But the twist to the story: one who appears on the scene is a Samaritan. It must have been obvious to the Samaritan from his clothes that the wounded man was a Jew. The Samaritan would have nothing to do with a Jew (see Jn 4:9: “The Samaritan woman said to him, ‘You are a Jew. How is it that you ask me, a Samaritan, for something to drink?’ – Jews, of course, do not associate with Samaritans”). But he breaks the ‘law’ of his own culture and times. He reaches out. This adds weight to the message of Jesus: your neighbor is anyone who is in need. Even if you have been brainwashed by your culture that the people of your in-group are more important than those of the out-group, you need to break the taboo and reach out to the person in need. This is the key message of the gospel text of today.

Having stated the core message of the gospel of today, I would like to focus on some details. Often I myself want to reach out to others, but lack the means, the time, and the resources. Sometimes, I feel overwhelmed to be acting alone faced with the enormity of the need of my neighbor. So what shall I do? How do I implement the message of Jesus?

“He lifted him up to his own mount” : Use your own means to reach out

As a priest ministering largely in the developing world, almost on a daily basis people come asking for help. Often help simply means money! And money, I do not have. So, how could I help? How could I reach out to my neighbor? Often I am like the disciples who replied to Jesus when he asked them to “give them something to eat yourselves”, “Are we to go and spend two hundred denarii on bread for them to eat?” (Mk 6:37). Jesus challenges me with the same words, “’How many loaves have you? Go and see.” In other words, he says, go and see what you do have, and help out your needy neighbor with that which you have! This is challenging!

The Samaritan in the gospel of today has compassion on the wounded man, he reaches out to him; he is ready to change his timetable. He does first aid – pouring wine and oil to disinfect the wounds – and then lifts the wounded man “to his own mount.” Basically, he uses what he has. That is it! His expertise ends there, not his compassion. So he does a referral!

May be I should do the same with those wounded brothers and sisters of mine in Africa and India – wounded by the lack of opportunities. I could offer them my time, my skills, my education. And not necessarily money! But when my limits end I can always do a referral to someone else.

“Carried him to the inn” : You don’t need to do it all on your own

Overwhelmed by the need around us, sometimes we all ask ourselves: what can I do alone – all by myself. It is too much for me. And thus, we do nothing about the situation.

Having provided first aid, and used the resources that he possessed, the Good Samaritan takes the wounded man to an inn. Probably, he could not take him to his own home. Maybe he was on an important mission and could not go back home. But he is able to create a network of helpers. The man outsources his objective of showing compassion.

It is not uncommon to see in the context of the charities run by the Church, and among religious orders, certain level of competition and even envy. What Jesus teaches us through the parable of today is to network with like-minded people so that we could reach out to our needy neighbors more effectively.

“On my way back I will make good any extra expense” : Follow up

To help someone once, just by dishing out some money is paternalism – acting as if you are superior to that person and showing off that you have something that they don’t have. One way of overcoming paternalism is by spending time with the person listening and being present for that person, another way is also to follow up the impact of the help rendered to that person.

Having taken the wounded man to the inn, the Good Samaritan is willing to do a follow up on this stranger: he promises to visit him “on his way back” and even pay the extra expenses that might be due to the inn-keeper.

The follow up can take several forms. If I am a frequent visitor on the road between Jericho and Jerusalem, and I am quite aware that the road is infested with robbers, maybe I might have to put up a sign-post that warns the travelers not to travel alone along that road. Maybe, I need to ask a more fundamental question: Why is this area full of brigands? What is driving them to such an action? Could there be a structural solution to this problem? And I might have to do some lobbying and advocacy work to deal with the problem. This way, I will be reaching out not just to one wounded neighbor, or not even to more neighbors, but I will be establishing the Kingdom of justice and peace more tangibly.

And Jesus said, “Go and do the same yourself!” 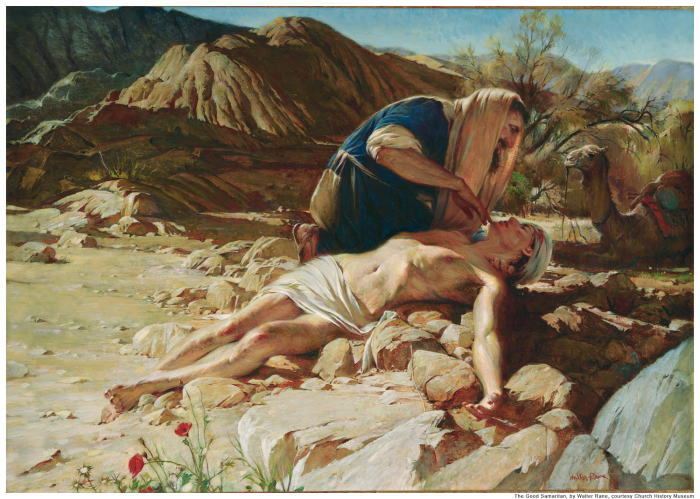