Posted on October 5, 2016 by friargaspar

The First Reading tells us about Namaan, a commander of the Syrian army who had the misfortune of leprosy and was referred to Elisha for healing. Elisha asked him to go and bathe in the Jordan River seven times which he did after an initial reluctance. The highpoint of the narrative was when after he was cleansed, he RETURNED to the man of God (Elisha) to show appreciation both by words and with concrete gift items which the man of God however did not accept.

The Second Reading is from the second letter of Paul to Timothy 2:8-13. In last Sunday’s extract from this same reading, St. Paul exhorts his convert and disciple to be proud of the Gospel. He must guard the rich treasure of the faith he has received from Paul and hand it on to the next generation. Today, he reminds Timothy of the resurrection of Jesus, the crowning act of divine drama of our redemption.

Gospel: It could actually be said that ingratitude is one of the most dangerous plagues besieging the human society. It is easily seen and felt every day and everywhere. Most people receive gifts and favours from others and forget to return those two words “thank you”. Often, most of us yearn for certain things from others; we fret for them as if we could die the next minute; but when such things come to us, we speed off as if they came on account of our power and might.

The Gospel reading presents a similar scenario. Here however there were ten poor lepers. They were not as rich and renowned as the leprous Syrian army commander Namaan; hence nobody cared about them as there was no person who referred them to anyone for healing but their faith. Among the ten of them was a Samaritan. Normally the Jews have nothing in common with the Samaritans but in this case, the nine Jewish lepers shared the same sickness and status with the Samaritan leper. In fact, among the Jews at the time, to be leprous was the same as being a Gentile; an outsider. Hence leprosy brought the nine Jewish men and the Samaritan into a community of the afflicted.

In their isolation and desperation, the ten lepers saw in Jesus Christ their only hope. It was with faith that they cried out to him and eventually got their healing. Faith is a wonderful virtue but it must be accompanied by good works to make a complete package (James. 2:14). Furthermore, faith without love is meaningless. (I Cor. 13:2). It was with faith that the ten lepers got clean. To the one who RETURNED, the Lord said your faith has made you well.

Looking at the two narratives together we discover that the thankful individuals were the foreigners: Namaan and the Samaritan. In life, we discover that those who appreciate us more are those who are not related to us or close to us. It is on account of this that our Lord Jesus Christ in Mark (6:4-5) said that a Prophet is not without honour except in his own country. Often familiarity makes us forget to be truly and actively grateful for the favours we received.

Another important element in the two narratives is leprosy, which is an adverse skin, mucous membrane and nerve disease caused by mycobacterium leprae which causes discoloration and wearing away of the skin. Among the Jews, its occurrence is believed to be on account of sin. Lepers are thus segregated from the normal people and they stay together in colonies and are often seen along the wayside begging for alms from a distance. Anyone who claims to have been cured from leprosy can only be certified by a priest whose duty it was to pronounce the individual clean (Leviticus 13:16-17).

In the narratives, we have eleven lepers altogether. They were all cleansed but only two RETURNED to give thanks. To return is a form of giving thanks. It means turning back again to the source of help or assistance in gratitude. When Namaan was cleansed not only of his skin condition but also of his arrogance that initially made him to refuse to bathe in the Jordan River, he returned to give thanks. When he saw himself cleansed, the Samaritan returned to our Lord Jesus Christ to give thanks.

Furthermore returning to give thanks cannot happen unless we REMEMBER. It is on account of this that in the second reading of today St. Paul admonished Timothy to REMEMBER Jesus Christ and all that he did. This remembrance is to be done with a grateful and appreciative heart. Hence anyone who is showing gratitude basically operates from the platform of remembrance. The Psalmist made it clear that God should be praised at the instant of remembering his holy Name (Ps 30:4; 97:12).

The message today is basically not for the nine ungrateful lepers but for all of us who now represent them. I believe that ingratitude is more dreadful and destructive than leprosy. The nine lepers were cleansed of physical leprosy but they still had the leprosy of ingratitude in them and that was why they were not saved; only the Samaritan received salvation: he was cleansed and saved.

Our ingratitude starts from ourselves and then extends to God. Gratitude even for a very minor thing can bring more favours just as ingratitude dismisses more favours. For the prayers, for those kind and supportive words, for the gift of money and other things you get from people, do you remember to show appreciation? Oftentimes we feel that the favours we receive are our rights or that people are obliged to give them to us and that there may not be need for us to return and show gratitude.

In our relationship with God the situation is even more shameful. Imagine if we recharge or top up the air we breathe the same way we do for our mobile phones; how many of us will still be alive? Yet we often don’t remember to return and say a heartfelt thank you to God. There are many of us who have been blessed and favoured in various great ways by God but we have not for once REMEMBERED to RETURN to God and to say “THANK YOU”. Even when we know that whatever we have is being given to us by God. God is so passionate about thanksgiving! It is to this end that He would declare in the book of Psalms (50:8-14) that he does not take delight in bulls and goats but in sacrifice of thanksgiving through which he will deliver us in the time of trouble.

An active search through the Word of God will show us that those who got enormous favours from God were those with thankful and appreciative hearts. David for instance in the book of Psalms praised and thanked God more than he requested for favours. We are especially called upon today to remember to return to God and thank him much as we should also be thankful for any favour done to us by anyone. It is worthy of note that the best way to show our gratitude to God for the numerous things he has been doing for us is to listen to him and to obey him. Our Lord Jesus Christ captured this very well when he said in the gospel of John (10:27) that his sheep LISTEN tohis voice and follow him.

What if God decided to stop leading us tomorrow because we did not follow him today?

What if we never saw another flower bloom because we grumbled when
God sent down rain?

What if God didn’t walk with us today because we failed to recognize it as his day?

What if God took away the Bible tomorrow because we would not read it today?

What if God took away his message because we failed to listen to his messenger?

What if God stopped loving and caring for us because we failed to love and care for others?

What if God would not hear us today because we would not listen to him yesterday?

What if God answered our prayers the way we answer his call for service?

What if God met our needs the way we give him our lives?

– The moments of Gratitude makes a difference in your attitude.

– When life gets sour sweeten it with Gratitude.

– Today I choose to live with gratitude for the love that fills my heart, the peace that rest within my spirit, and the voice of hope that says … All things are possible.

– Choose to see the world through grateful eyes. It will never look the same way again.

– Be grateful and embrace the lessons before you; It is not what LIFE brings to you,
it’s the attitude you bring to LIFE. 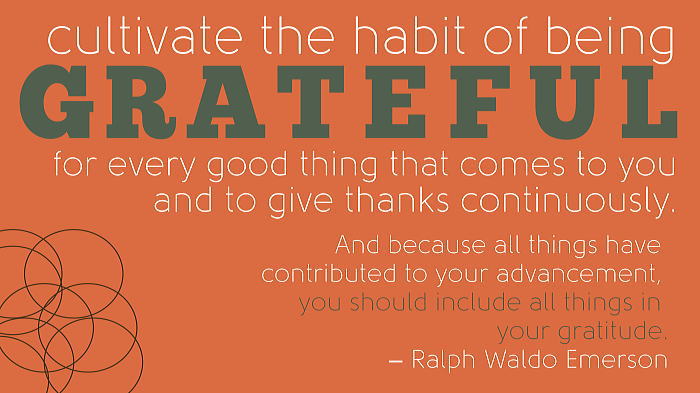