“It is finished’; and he bowed his head and handed over his spirit.”

On Good Friday, the entire Church fixes her gaze on the Cross at Calvary. Each member of the Church tries to understand at what cost Christ has won our redemption. In the solemn ceremonies of Good Friday, in the Adoration of the Cross, in the chanting of the ‘Reproaches’, in the reading of the Passion, and in receiving the pre-consecrated Host, we unite ourselves to our Savior, and we contemplate our own death to sin in the Death of our Lord.

The Church – stripped of its ornaments, the altar bare, and with the door of the empty tabernacle standing open – is as if in mourning. In the fourth century the Apostolic Constitutions described this day as a ‘day of mourning, not a day of festive joy,’ and this day was called the ‘Pasch (passage) of the Crucifixion.’

A crucifix or cross hangs somewhere in almost every Catholic home, in every Catholic school and institution. The crucifix or cross is the central and most widely known symbol of Christianity and has been for over two thousand years. In a world where little seems permanent, where things come and go easily, where passing fads are commonplace, where so much is considered relative, the fact that a symbol has endured for so long everywhere should convey something to everyone who sees it, even to those who do not believe in Christ or Christianity or religion.

The cross, or better, the crucifix — the difference being that the crucifix displays Jesus’ brutalized body – — has endured because it depicts and represents the turning point of humanity and life in this world has we have known it. The Lord Jesus Christ — the Word made Flesh, the King of Kings and the Lord of Lords, God Himself — was put to death by us, by those He came to save, the saddest admission we have to make. But, the most hopeful admission we have to make is that He died for us and in His death, He did save us. Nothing more important has ever happened in the history of the world than the moment of His death, which we remember in a dramatic way today, Good Friday, and every time we look at the crucifix. And we who believe, who have faith in the Lord Jesus Christ, also know that His death was not, is not the end of the story.

Think for a moment about the cross: two beams of common, simple wood. Originally, it had no other purpose than to be an instrument of death. What brings those beams together, what makes the cross a crucifix is not the intersection of wood upon wood, no. What brings those beams together and makes the cross a crucifix is the intersection of wood and flesh: a body stretched on a vertical wooden beam; arms outstretched on a horizontal wooden beam, a body with its furthermost extensions attached by nails. This instrument of death was reserved for criminals and those considered unworthy of human life and human breath.

The cross that we behold, the crucifix that is the central symbol of our faith, held the body of the One whose only crime was that He loved us without condition or reservation and that He was willing to show the depth of His love with the ultimate and absolute sacrifice. “Greater love than this no man has than that he lay down his life for his friends (John 15: 13).” This was the love of Jesus Christ, the Son of God, for us, His friends. It was He, this criminal who was considered unworthy of human life and breath and, so, put to death on a cross, it was He whose death made all human life worthy; whose sacrifice made every human breath holy. In Jesus Christ, God’s love was made real, visible, tangible.

God’s love makes no exceptions. As Jesus Christ walked to His crucifixion, He carried on His shoulders not only a cross but also the weight of us all. “It was our infirmities he bore, our sufferings he endured … he was pierced for our offenses, crushed for our sins … the Lord laid upon him the guilt of us all” (Isaiah 53: 4-6). My sisters and brothers, the crucifix is not a decoration or merely a symbol. The crucifix is the most powerful reminder of the greatest love the world has ever known: one wooden beam pointing from the earth to the sky, pointing our attention to God; another wooden beam pointing from east to west, pointing our attention to our fellow human beings. And what brings those two wooden beams, those two directions together, is a single body, His body, Jesus Christ, whose life of suffering and transforming love was a life and a love for all: a crucified love that has endured and will continue to endure. A love that turns the wood of a tree, the tree of defeat and death, into a tree of life and victory.

Why is this day called “Good Friday”?

Good Friday is the most solemn day of the Christian year. It is the day our Savior died for us. It is the day we were redeemed from our sins by the voluntary death of God Himself at the hands of man.

It’s not for the reason you might think. Despite the fact that “good” is a common English word, tempting us to say the name is based on the fact that something very good (our redemption) happened on this day, that’s not where the name comes from.

The origin of the term Good is not clear. Some say it is from “God’s Friday” (Gottes Freitag); others maintain that it is from the German Gute Freitag, and not specially English.

It is also argued that the name is based on a Medieval use of the word good where it meant “holy.” Thus “Good Friday” would have come from “Holy Friday,” the same way we have Holy Thursday and Holy Saturday.

The Latin form of “Jesus of Nazareth, the King of the Jews” is
“Iesus Nazarenus Rex Iudaeorum”.
The first letters of this title provides us with INRI.

SEVEN LAST WORDS OF JESUS ON THE CROSS 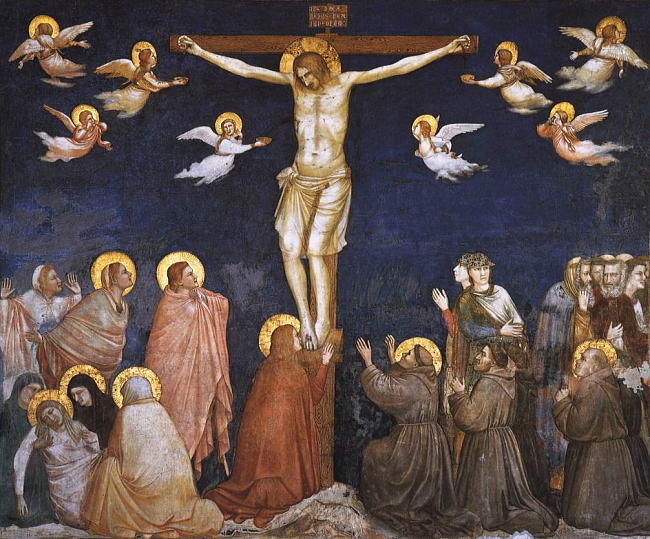 This entry was posted in 2017, English, Friar Gaspar, Lent, Year A. Bookmark the permalink.