Seventeenth Sunday in Ordinary Time – A

“LORD, YOU ARE MY GREATEST TREASURE!”

Today is the Seventeenth Sunday in Ordinary Time. Today’s Scripture Readings continue to help us delve into the meaning of the Kingdom of Heaven and to deepen our commitment to it. They put stress on the importance of the Kingdom of Heaven and demand a personal response on our part to God and his Kingdom. In the Gospel Reading from St. Matthew, the Evangelist speaks of the Kingdom of Heaven as the greatest treasure in the life of a disciple, using the images of hidden treasure and a pearl of great price. It is with joy and assurance that one sells everything else to obtain them. There is also mention of another parable, the parable of the dragnet thrown into the sea, similar to one about the wheat and the darnel, and the separation process at the end of time.

“GIVE YOUR SERVANT AN UNDERSTANDING HEART TO JUDGE YOUR PEOPLE …”

The First Reading from the 1st Book of Kings is clearly chosen in view of the idea that discipleship requires a person to choose the one thing that is most important of all. God’s offer to grant whatever King Solomon asks for is exceptional. On the other hand, King Solomon’s request is equally extraordinary: he eschews wealth, longevity, and power over his enemies and simply asks for what he needs to fulfill the mission entrusted to him by the Lord, viz. “An understanding heart to judge your people and to distinguish right from wrong.” In return, the Lord God lavishly promises that Solomon will be unsurpassed in wisdom among all the rulers of the earth. Moreover, He gave the other things that Solomon did not ask for. God grants him his request and more qualities to indicate their divine origin. As the Bible attests Solomon governed God’s people as wisely and justly as no other king had done.

Now, when we think of wisdom – it is much more than knowing a lot of things. Being endowed with wisdom is much more than being just a morally very good person. Wisdom gives an insight into what is truly important in life, an awareness of the meaning and purpose of living, of what really matters. It is an understanding of where our real well-being and happiness lies. That is indeed a pearl of great price, priceless in every sense of the word.

“CALLED TO BE CONFORMED TO THE IMAGE OF HIS SON.”

Acquiring the absolute treasure entails deep sacrifice. In the Second Reading of today from his letter to the Romans, St. Paul assures the Christian community at Rome that ‘all things work for good for those who love God.’ He stimulates their zeal and enthusiasm in the midst of difficulties and persecution by reminding them that God’s plan of salvation, which is definitively in progress, leads to the glory that is their destiny. Called to be conformed to the image of His Son, nothing will ever happen to them that has not been foreseen by God and directed to their greater good from all eternity. God is in control of everything. The ultimate goal is to be configured to Jesus Christ, who in his paschal sacrifice, was totally glorified. If we are among the humble and obedient servants of God, those that He foreknew, then we are among those who have been called to be justified. We are among those who will be glorified in Jesus Christ. This is God’s purpose, and this should also be our purpose in life.

The Gospel Reading of today completes the ‘Discourse in Parables’ in which St. Matthew has collected various teachings about the nature of the Kingdom of Heaven proclaimed by Jesus. We are again presented today with three parables, each of which contributes some insight into the nature of that Kingdom. The first and second parables are closely linked in meaning but with slight differences. They are in effect saying that the Kingdom of Heaven is the most precious thing in life. That is, it is through Jesus and his words that we come to know and understand what is the real meaning of life; what are the most important things in life.

a) The Parable of the Hidden Treasure:

In the first parable, viz. the parable of the hidden treasure, Jesus compares entering the Kingdom of Heaven to a person who unexpectedly stumbles upon a hidden treasure buried in a field while tilling the soil. Forthwith, he buries it again for the field where it is hidden does not belong to him. He does not tell the owner of his discovery, but sells everything he has in order to get ownership of the field and hence of its buried treasure. The idea obviously is that when one really discovers Jesus and his vision of life everything else becomes secondary. In the service of the Kingdom of Heaven there are no half measures and in that service there is a special kind of liberating joy. It requires boldness and decisive action, a single-minded commitment of all one’s resources.

b) The Parable of the Pearl:

In the second parable viz. the parable of the pearl, Jesus tells of a merchant in search of fine pearls. When he finds one of great price, he also sells everything he has in order to acquire it. This parable is similar to the first one but, in this case, it is not a laborer (a poor man) who actually is not looking for the treasure discovers the treasure in the course of his ordinary working day, but a merchant (a rich man) who purposely seeks it out. There is a need, as the Gospel constantly urges, for us to be ready whenever and however Jesus comes into our lives. Kingdom of Heaven is all-inclusive, available to rich and poor alike. Still, the merchant like the laborer must risk everything to succeed. The Reign of Jesus in our hearts is the buried treasure or the pearl of great price. It is for this that Jesus is asking us to search, and once discovered and its value fully appreciated, to sacrifice everything to possess it. And the message is clear – discipleship is open to all but entails sacrifice. Equally clear is the outcome of the disciple’s quest – a joy that exceeds imagination when he has found the only truly valuable thing in life.

c) The Parable of the Dragnet thrown into the Sea:

This brings us to the third parable of today viz. the parable of the dragnet thrown into the sea and it focuses on the ultimate judgment. Here Jesus compares the Kingdom of Heaven to a fishing net which when thrown into the sea collects all sorts of fish. The net could not and does not discriminate. It is left to the fishermen to do the dividing and the separating. While the first and second parables speak of the total commitment and dedication which are the ideal of every follower of Christ, this third parable helps us to put our two feet firmly back on the ground. It hearkens back to last week’s parable of the wheat and the weeds that tried to explain the presence of those evil ones who seem unfit for the Kingdom. The invitation of Jesus to be part of God’s reign is open to rich and poor, good and bad; in fact, many of all sorts are collected into the community of disciples. But at the end there will be a sorting out of those who are worthless and those who have been proven valuable, and reward and punishment will be administered accordingly. But this time it is the angels who will make the judgment.

d) “Do you understand all this?”

At the end when Jesus asks his disciples, “Do you understand all this?” the disciples declare that they have understood what he has taught them in and through these parables. Jesus then responds with a saying that describes the calling and task of everyone who desires to be his follower in the Kingdom of Heaven. It is a matter of drawing on the rich treasury of the past, but shaping it to apply for guidance into the future. Jesus tells them that they will be like Scribes or men of learning who will have ancient and modern teaching with them to give to the hearers. The past tradition is not to be done away with, but we can never return there to live. The future requires the past for a firm foundation without which it will never be realized. This balancing act is the task of each one of us who have been instructed in the Kingdom of Heaven.

The real or true treasure is the Kingdom of Heaven, of which Jesus speaks in the parables today. For much of the time, we are chasing false treasures, mainly money, status and pleasure. For much of the time we are locked into the past – full of nostalgia or regrets, or focused on the future – not yet achieved longings and desires, or depressing fears and anxieties. Meanwhile the enriching present passes us by and the treasure is never discovered and the really valuable pearl is never found.

Today we are asked the question, ‘What is the greatest treasure in your life?’ And each one of us has to to give a personal answer to it. The pursuit of the Reign of God necessitates an understanding heart. A heart filled with ‘wisdom’ is able to distinguish what is right from wrong, to discern what is true and absolute from the false and, above all, to make a fundamental option for God even to the point of most painful sacrifice. The wisdom that makes us understand what is pleasing in God’s eyes, also prompts us to say, “Lord, you are my greatest treasure!” 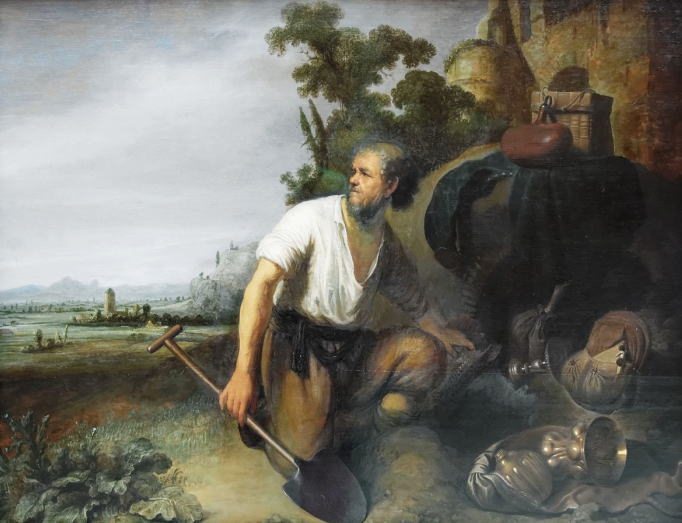