Twenty-second Sunday in Ordinary Time – A

IN DYING WE ARE BORN TO ETERNAL LIFE

In the First Reading Jeremiah seems to regret that he was called by God to be his prophet. “You have seduced me, Lord, and I have let myself be seduced.” As a result he became an object of people’s ridicule, “everybody’s butt”. Every time he opened his mouth, he had to warn of violence and disaster coming on God’s people. In return he got nothing but insults and derision. He decided he would not speak about God. “I will not think about him, I will not speak in his name any more.”

But that did not work. “There seemed to be a fire burning in my heart… The effort to restrain it wearied me, I could not stand it.” He just had to go on speaking God’s message, which was like a fire in his heart, to his people whatever the cost to himself. It is a situation like this which explains why a person would risk insults, suffering and even death in order to witness to Truth and Love. Many people languishing in jails today for expressing their religious and political beliefs know this feeling. We have seen how political or religious dissidents released from jail show no signs of “conversion” and continue the struggle for human dignity. It is something which those who see life in terms of material comfort and power simply cannot understand.

Paul, in the Second Reading, also knew all about this. He urges his fellow-Christians to offer their “living bodies as a holy sacrifice, truly pleasing to God” and not to “model [themselves] on the behaviour of the world around [them]”. They need a “new mind”, the way of thinking which Jesus had and which Peter certainly did not yet have in today’s Gospel.

In last week’s Gospel, we saw the disciples riding high. They had, through Peter, acknowledged that Jesus, their teacher and friend, was no less than the long-awaited Messiah-King of Israel. “You are the Christ, the Son of the Living God.” It must have been a really exciting moment for them. This, in turn, brought from Jesus a commission of the highest responsibility to Peter and his fellow disciples. Through Jesus, they were to be given the authority of God himself within their future communities. Peter himself is spoken of as a rock, firm and unshakeable, on which the ekklesia, the Church community, will be built.

It is hard to imagine that this was not a moment of particular joy and satisfaction for the disciples. They now were thinking that Jesus, in line with Jewish expectations, would be a glorious and powerful king. And they, of course, as his followers and companions would have a special share in the glory and privileges that went with it. (Later, would not two of them go so far as to ask, rather cheekily and behind their brothers’ backs, for special places in the Kingdom, to sit on the right and left of Jesus?)

However, the euphoria was not to last very long. Very soon after this, “Jesus began to make it clear to his disciples that he was destined to go to Jerusalem and suffer grievously at the hands of the elders and chief priests and scribes, to be put to death and to be raised up on the third day.” This, undoubtedly, comes as a terrible shock. This was not at all part of the scenario for the coming of the Messiah! What is worse, the agents of Jesus’ humiliation and death will not be some hostile outsiders (like the pagan and barbaric Romans) but the leaders and most distinguished people of their own community. The elders, chief priests and scribes were the people who formed the Sanhedrin, the ruling body of the Jews in Palestine.

Furthermore, it would happen in Jerusalem, the holy city, the site of the Temple where God dwelt among his people. It might be remembered, however, that Jerusalem was the city where prophets died. (“O Jerusalem, Jerusalem, killing the prophets and stoning those who are sent to you!’ – Jesus’ words to the Pharisees [Matthew 23:37].) The disciples must have felt very disturbed and confused indeed.

So, it is not surprising that at this point, Peter, still flush with his newly-acquired status, takes Jesus to one side, speaking to him almost on equal terms. “Heaven preserve you, Lord! This must not happen to you.” How can this happen to the Messiah-King of Israel? The angry reaction of Jesus must have come as somewhat unexpected, to say the least. Turning to face Peter, Jesus says: “Get behind me, Satan!” These are strong words for someone who just now was being given leadership of the community Jesus would leave behind. It is not to be understood that Peter is literally a demon but the disciple’s words are understood as a real temptation to Jesus to turn away from the path he is to follow. Unwittingly and with the best of intentions, Peter is doing the devil’s work – trying to steer Jesus away from the path laid out for him by his Father. How often have we been such a temptation or stumbling block to others? Perhaps more often than we care to think.

“You are an obstacle in my path, because the way you think is not God’s way but that of a human being.” Peter is seen as an obstacle, a scandal, a stone in one’s path which causes one to stumble. Ironically, the ‘rock’ which Jesus just now had said would be the foundation of his ‘church’ is now seen as an obstacle to Jesus’ work and mission!

The mind of Christ

Jesus is angry for, though his disciples may have acknowledged that he is the Messiah, they clearly have no idea whatever what kind of Messiah-King Jesus is going to be. They are, as he says, thinking in purely human terms and have not yet got “the mind of Christ” (Philippians 2:5).

They shall have to change completely their ideas about what the Messiah is going to be like. He will not be a great political and military leader who will sweep away all of Israel’s enemies. Even after the resurrection they were still thinking in those terms. “We had hoped that he was the one that would redeem Israel”, said the two fellows on their way to Emmaus (Luke 24:21), not realising the irony of their words. “When will you restore the kingdom of Israel?” the disciples asked Jesus as he prepared to leave them at the Ascension.

Yes, Jesus will be a King, but he will be a King of love, a King who will rule by serving. Because he loves and serves them, he will, if necessary, be prepared to die for them, for this is the greatest love that a person can show for his friends. This is not to say that Jesus wants to die on the cross but he is totally prepared to suffer and die, if the service of love demands it – and it will. Ultimately, the disciples will see that the death of Jesus was the source of his greatest glory and power. “When I am lifted up from the earth [on the cross and into glory], I will draw everyone to me” (John 12:32).

Today’s Gospel goes further than just asking us to understand why the glory of Jesus our King and Lord was to be found through suffering and the shameful death of the Cross. There is a further call for us to walk the same road with Jesus. “If anyone (not just the heroic martyr or the saint) wants to be a follower of mine, let him renounce himself and take up his cross and follow me.” Jesus is asking each one of us to dedicate our lives in totally loving and serving others even if, at times, this involves misunderstanding, ridicule, pain and even death itself.

It would be altogether wrong to think that Jesus is asking us to lead miserable lives in order to be good Christians, although one gets the impression that some people interpret the passage in that way. To follow Jesus fully, we must be able to see life as he sees it, we must have that “mind of Christ”.

When we have the mind of Christ then we can only see our lives in terms of loving and serving others and not in the pursuit of purely self-centred or even family-centred ambition. When we have the mind of Christ, the whole direction of our life changes. Our whole concept of happiness changes. Jesus is calling us not to a life of sacrifice and suffering but rather to a life of total love and freedom. The person who can go to jail for his beliefs is more free and usually a lot happier than the one who is tied to the pursuit of material things, social position, pleasure and the fear of pain.

“Renouncing oneself” is not a suppression of one’s personality. It is rather to let go of oneself so that one can really find oneself.

This is what today’s readings are saying, namely, that Jesus is calling us to where true success and happiness are. Maybe when we walk the way of Jesus there will be people who criticise us, think we are stupid and even attack us. Yet those who have chosen the way of Jesus again and again confirm that their lives are full of freedom, happiness and peace. Isn’t that what we all would like to experience?

In simple terms when Jesus says whoever loses his life for my sake will find he is talking about following him rather than following after your own desires. This is covered in verse 24 of this section saying, “If any man would come after me, let him deny himself and take up his cross and follow me.” There are three distinct points to this verse. Firstly he says, “If any man would come after me,” meaning to follow Jesus. If they are to follow him they must be prepared to do what follows. The second point is to “deny himself.” By denying oneself a person puts the needs of the Lord before their own needs. There are times in following the Lord when we must put our own needs second to what the Lord may require of us. Which brings us to the third point, which is to “take up his cross.” This is a representation of the need to suffer and as Christians we will go through suffering from time to time for our walk with Christ. As Peter wrote, “Beloved, do not be surprised at the fiery ordeal which comes upon you to prove you, as though something strange were happening to you. But rejoice in so far as you share Christ’s sufferings, that you may also rejoice and be glad when his glory is revealed.” (1 Peter 4:12-13) We must be prepared to suffer for Christ if that were needed in our endeavour to follow him.

The principle of “whoever loses his life for my sake will find it” is bound up in the need to follow Jesus. Everything else a person can do is secondary to this requirement. As Jesus said to the rich young man, “Jesus said to him, “If you would be perfect, go, sell what you possess and give to the poor, and you will have treasure in heaven; and come, follow me.” (Matthew 19:21) Perfection in Christ is attainable only by following him. We must be prepared to give up everything for his sake if we are to achieve life, for all other things are distractions. 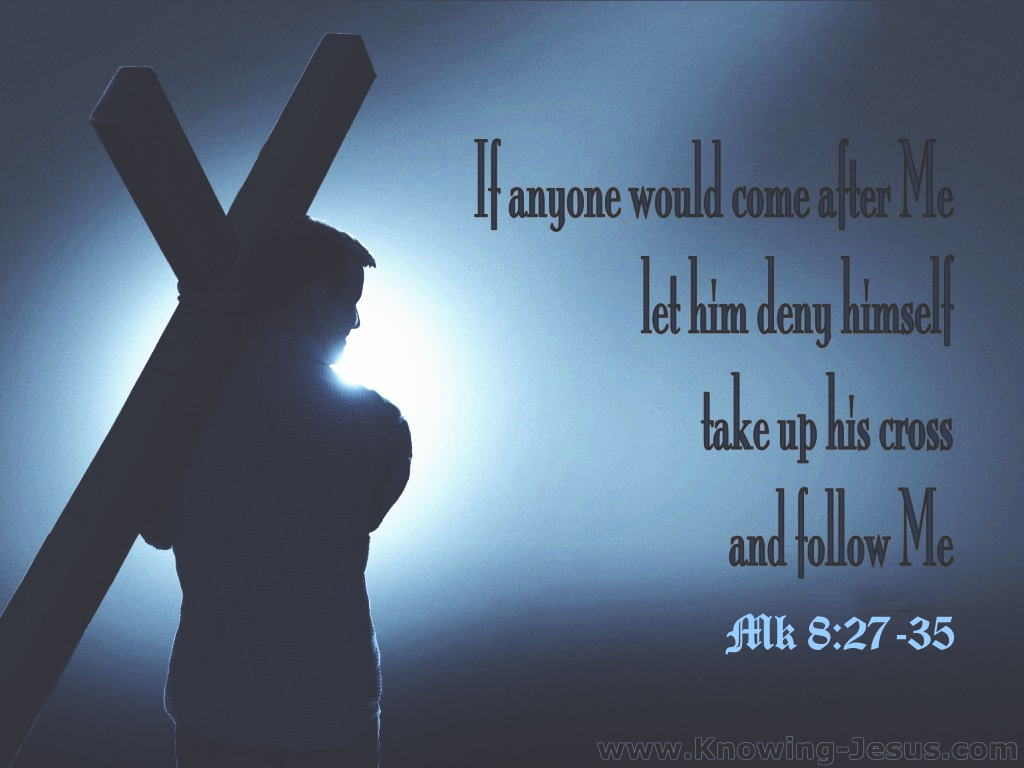