Thirty-first Sunday in Ordinary Time – A

Posted on November 3, 2017 by friargaspar

“THE GREATEST AMONG YOU MUST BE YOUR SERVANT.”

It is rightly said, ‘Example is not the main thing in influencing others – it is the only thing.’ People will not attend to what we say, but examine into what we do; and will say, ‘Do you first obey your own words, and then exhort others?’ In today’s Gospel passage, Jesus criticizes the scribe and the Pharisees for their hypocrisy. Are we also pretenders? Or, do we wear masks so as to hide our real self from others?

Today is the 31st Sunday in Ordinary Time and we are coming very near the end of the Liturgical Year. We are also coming to the end of Matthew’s Gospel where there is a growing conflict between Jesus and the religious leaders of his people. But there is no conflict with the ordinary people who are delighted and amazed at the words and actions of Jesus. The Scripture Readings of today contain serious attacks on the religious leadership of the time and they tell us of God’s rejection of inauthentic religious attitudes.

In the First Reading from the Book of the Prophet Malachi, the Prophet Malachi speaks God’s word to the Israelite priests after their return from exile. He criticizes them for the injustice and unfairness of their decisions concerning others. The Gospel Reading from St. Matthew is an even clearer indictment of the Pharisees, popularly regarded as models of religious holiness. Jesus criticizes them for their lack of personal coherence, preaching to others what they themselves would not do. He also condemns their vanity, searching for public praise and honor instead of offering genuine worship due only to God. Jesus then reminds the crowd that it is the Father in Heaven who is to receive all honor. The mark of the genuine Christian is humble and sincere service. In the Second Reading from his 1st Letter to the Thessalonians, St. Paul tells the Christians at Thessalonica that it was in an attitude of humble service, that he and his companions taught the Gospel to them, just like a mother caring for her children. He also thanks God that they recognized in his preaching not a human message, but the word of God Himself.

INDICTMENT AGAINST THE TEMPLE PRIESTS:

The Prophet Malachi is one of the minor prophets who preached after the return of the Jews from exile in Babylon and after the construction of the Temple in Jerusalem (517 BC). There was a sort of reactionary renewal in effect in Judaism at that time. The Prophet was terribly disappointed in the behavior of the Temple priests and how they cheapened and trivialized the sacrificial system.

Today’s First Reading is an indictment against the abuse of religious authority for self-gain. The priests were offering ‘polluted’ sacrifices of sick and worthless animals and have failed to honor the integrity of the Lord’s name. The Prophet Malachi tells them how they have fallen from the grace of the Lord God and have brought the religion to disrepute. But their core offense consisted of that they have turned away from the right path and by their teaching have led many to do wrong. Indeed, they have broken the covenant with God by their wicked ways. Moreover, they have been also currying favor with the rich and powerful and by their irresponsible decisions, they have made a travesty of justice. The prophet tells those sinful priests that God offers them an opportunity to repent and change their ways. If they will not, God threatens to send the curse upon them that is the opposite of blessing a worthy priest deserves to receive. In fact, God had already taken away the blessings of some. He was now going to make them become the scorn of other nations, abasing them before all.

“THE GREATEST AMONG YOU MUST BE YOUR SERVANT.”

In today’s Gospel Reading from St. Matthew we are given the first part of a very harsh polemic which Jesus delivered against the scribes and Pharisees. Jesus’ language shocks people. Is this the gentle Jesus who commands us to love our enemies? And what is just as bad, these passages have been used down the ages as a source of anti-Semitic attacks which refer to the hypocrisy of Pharisees.

The Scribes and the Pharisees were the religious leaders of the time, occupying the seat of Moses and Jesus never questioned their authority to teach and preach. But he charged them for their hypocrisy and their pride, for they did not have integrity of life – their life lacked humility, honesty and service, and they failed to practice what they preached. Jesus attacks this pharisaic mentality in three areas:

First. Jesus says the teaching of the Scribes and Pharisees should be followed because they are simply handing on the truths of their faith. But their behavior is a different matter altogether. They create a double standard – they say one thing and do another. Therefore, he urges his followers to follow their teaching, but not to follow their example. On the one hand, the Scribes imposed heavy burdens on people’s shoulders but were not willing to lift a finger to remove or lessen them. In fact, over the years more were added to these already unbearable rules.

Second. Jesus makes a strong observation about the way they dressed to make themselves noticed by others and respected as religious persons. In other words, Jesus criticizes their vanity and hypocrisy. He says they wear all holy costumes, headbands and tassels in front of their eyes containing inscriptions from the Scripture. The reason why they did is because in the Scripture God says – ‘Keep my words always before your eyes.’ So, when the Pharisees moved their heads, they would see the words of the Scripture, thereby keeping God’s words before their eyes. According to Jesus, these Pharisees went trick or treating to all important banquets, so that everyone else could see them. That’s all they really wanted. They were just putting on a show and looking for public acknowledgment and special privileges. They knew how to hold their arms up in prayer. They said the proper pious platitudes. They pretended to be holy, but they were not holy. And there is a clear message there about status and power.

Third. There is the question of titles. Jesus says that the scribes and the Pharisees loved to be greeted in marketplaces and addressed as ‘Rabbi.’ This because they were so enamored of their self-importance and virtues. The point Jesus wants to make here is that God alone is the source all truths and He alone as the source of all life has the right to titles of Lordship or authority. And that’s why he tells his disciple not to be addressed as ‘Rabbi,’ or ‘Father,’ or ‘Master.’

Now, it is easy to read today’s Gospel and start pointing fingers at others but it is important that we see how it applies in my own life. The Gospel is always addressed to ‘ME.’ And today I need to hear what it is saying to me now. Of course, I can point a criticizing finger at all the officials I know, political, religious or otherwise, but am I so different? How often do I stand on ceremony? How touchy am I about how people treat me, especially if I have some title or responsibility, even if just that of a parent or schoolteacher? Respect cannot be demanded but only earned.

Finally, Jesus concludes by saying, “The greatest among you must be your servant. For whoever exalts himself will be humbled, and whoever humbles himself will be exalted.” In other words, greatness in leadership is shown by being at the service of others – to be servant-leaders. When we put ourselves on a pedestal of authority, we are in danger of being knocked down. When, following the advice of Jesus, we realize that real greatness is in offering ourselves in service as a brother/sister to brothers/sisters, then we are likely to meet support, understanding and cooperation in bringing people closer to God. For such people, the loneliness at the top will never be a problem.

AN EXAMPLE OF HUMBLE SERVICE:

In the Second Reading from his 1st Letter to the Thessalonians, St. Paul speaks of himself and his companions acting with genuine kindness with all possible care and protection of the Thessalonians like a nursing mother. Without boasting they shared the Good News and their very selves with them. They evangelized by word and deed – by their life and teaching. They were upright and without deception. They were men of integrity and sterling qualities. Moreover, St. Paul made a very special point of not seeking or accepting financial assistance from his converts as he in no way wanted to be a burden on anyone or the community. The demands that he and his companions made upon the Thessalonians were spiritual demands. Paul worked with them to guide them for their own personal spiritual benefit and growth. Really he did not spare his pains; he gave himself to their service without reservation. But he never attributed to himself the success of his preaching. Finally, St. Paul thanks the Lord for the faith response of the Thessalonians and is certain that indeed God works in those who believe.

This is what service means. As long as we have our health and energy, each of us should do our best not to be a burden on others. When we truly try hard to offer what we have for the well-being of others we are not likely to be such a burden. It is said, ‘when everyone is giving then everyone is receiving’. It is a beautiful way to live but it is not the way of our rat-race, competitive society which thinks only of ‘How much can I get?’

Although Jesus’ criticisms are directed explicitly against the popular Pharisees as religious teachers and apparent models of holiness, it is clear from the text that Jesus wants to teach everyone authentic religious devotion. Today, we all are called for integrity and honesty, where there is no pulling of rank, no demand for respect or privilege or a hearing, no double standards but a deep sense of equality and mutual respect, a desire to serve, to share what we have and are for the benefit of all.

Every Christian therefore, despite the temptations to Pharisee-ism in all of us, is to seek to render selfless service rather than to obtain titles, recognition or power. Our Christian love demands of us to manifest God’s love in our life. This sounds simple but, in practice, it is something we seldom seem to do. Let us remember Jesus saying, “The greatest among you must be your servant. The best soil for the growth of Christian virtue is humble service and detachment – detachment from not only things, but from praise and prestige. In the humble Christ – poor, shunned and oppressed – is where the growth of virtue always finds a home. And this is the Good News of today. 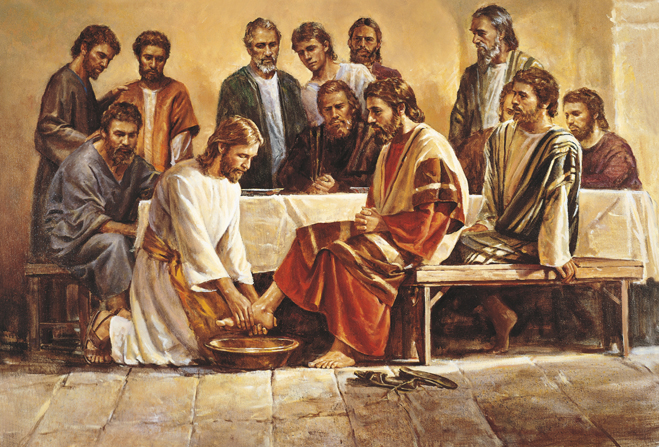