Nativity of the Lord (Christmas)

When God gave the gift of salvation to mankind, He didn’t send a booklet of complicated instructions for us to figure out. He rather sent His only Son – “Emmanuel, which means ‘God is with us.’”

Today, with great joy and solemnity we celebrate Christmas – the feast of God’s magnanimous and unconditional love, the feast of God’s self-gift to mankind. For Christmas is ‘God’s gift laid in human hands.’ The Christmas event, i.e. the birth of our Lord Jesus in a stable in the small village of Bethlehem of Judea is one of the most important events in the history of mankind, an event when God takes the human form in the person of Jesus and comes into the world to save mankind from sin and death.

Originally, the Romans celebrated a feast on this day, called the ‘festum solis invicti,’ – the festival of the unconquered sun. The winter solstice has just passed and we are now moving into longer days, with more light and the resurgence of life in the soil. One can almost see Nature slowly waking up after its long winter hibernation. The trees look dead with their bare branches but in a matter of weeks they will be decked in all their leafy glory. All these speak of the Christmas phenomena of light and its joyful atmosphere, filling everyone with the hope of salvation.

The Christmas story resonates with the theme of light and the baby in the manger is the Light of the World. Light surrounds the shepherds as the angels sing their praises of God: “Glory to God in the highest and, on earth, peace to all who are favored by God.” The whole atmosphere is also suffused with joy, the joy of the angels and of the shepherds as they hasten to Bethlehem to find the new-born child. Joy is a theme which goes right through Luke’s gospel. Let us also today joyfully say, “LET’S GO! LET US GO TO BETHLEHEM…”

Another cause for joy is the liberation that Jesus brings. The First Reading from all four Christmas Masses is from the Prophet Isaiah who tells of the restoration of Jerusalem from total destruction. This morning’s passage proclaims boldly: “Your Savior has come and you are made holy by this coming.” Isaiah makes it clear that we are made holy by God’s presence in our midst – ‘He is Emmanuel.’

In the Gospel Reading, the angel too joyfully announces to the shepherds the message of salvation – “To you is born this day in the city of David, a Savior, Who is the Messiah, the Lord.” and joining together with the shepherds let us say – “LET’S GO! LET US GO TO BETHLEHEM…”

Now, we began our Christmas celebration with Night Mass, and the story of the birth of Jesus in the stable in Bethlehem, told in a very matter-of-fact way: St Luke at his pithiest. There is a striking contrast, in fact, between the humble ordinariness of Christ’s birth and the dramatic scene when the angel of the Lord, and the whole heavenly host, appear to the shepherds in the nearby countryside.

In fact, we left the angels singing the ‘Gloria’ until the Dawn Mass, when the story is taken up again with the departure of the angels. The shepherds then dash off to see the child for themselves. It’s rather a great idea that the angels are left singing all night by the liturgical arrangement of these two gospels. It reminds us that the heavenly choirs are joined in perpetual adoration of God, that heaven never sleeps; and that our participation in the liturgy, such as when we sing the ‘Gloria’ at Dawn Mass, is a share in the eternal worship of the angels – the very life of heaven itself.

The Gospel Reading this morning shows us how to exactly connect with Christmas. The shepherds lead us in the way of action: “LET’S GO!” they say. “LET US GO TO BETHLEHEM.” It’s the road we also must take to meet Jesus—not in a dream world, not in theory, but in the concrete circumstances of our lives. We need to ask ourselves right now ‘Where should I be heading? Where concretely is Jesus waiting for me?’

On the First Christmas night infant Jesus, Mary and Joseph were alone. But God sought out simple people as their companions: some shepherds, perhaps because, as they were poor and humble, they would not be dismayed at finding the Messiah in a cave, wrapped in swaddling clothes. Perhaps, it is to the shepherds of that district that prophet Isaiah referred: “Those who dwelt in the land of deep darkness, on them a light has shone.” Never again will they be despised as having a menial task, or as being derelicts, worthless scruff on the edge of society. A whole new dignity will descend upon them as Jesus will one day dignify himself by calling himself the good and gentle shepherd.

The shepherds, though, don’t seem to pause to reflect on the extraordinary privilege they have been granted of witnessing the heavens opened: they go straight into town to “see this thing that has happened.” And it is this – the apparently ordinary birth of a child in inauspicious circumstances – that really impresses them. But the shepherds know that in this particular child, in this particular time and place, they are encountering something much more. The angels have told them that this child, wrapped in swaddling clothes, is Christ, the Lord, the Savior of the world. Their little glimpse of heaven has encouraged them to go back to look at the world with new eyes, to see the real meaning of events that look, outwardly, perfectly ordinary. This is what causes them to go back “glorifying and praising God.”

It is a wonderful thing that the story should tell that the first announcement of God came to some simple shepherds. It was to simple men of the fields that God’s message came first. But these were in all likelihood very special shepherds. They lived in the outskirts of Bethlehem, close to Jerusalem where the temple was, where every morning and evening , an unblemished lamb (that must have come from them) was offered as a sacrifice to God. It is therefore a lovely thought that shepherds who looked after the lambs for temple sacrifices were the first to see “the Lamb of God who takes away the sin of the world.”

Again, God also wanted those shepherds to be the first bearers of the news that they would go around telling “all they had heard and seen. And all who heard it wondered at what the shepherds told them.” In the same way Jesus reveals himself to us in the midst of the ordinary incidents of each day; and we need the same dispositions of simplicity and humility in order to reach him. It is possible that throughout our lives he gives us signs that mean nothing to us if we see him merely humanly. We have to be alert so as to discover Jesus in the simplicity of ordinary life, “wrapped in swaddling clothes and laid in a manger,” without any showy manifestations, and proclaim him to the world.

Christmas is God’s gift to us, an opportunity for new beginnings. It is not that we have found him; but that we have allowed him to find us, and fill us with wonder and surprise and dignity. It is inconceivable that the shepherds would not have set out without taking gifts for the baby – most probably the choicest of lambs. Nor, can we go to the cave of Bethlehem without taking our gifts. So, “LET’S GO! LET US GO TO BETHLEHEM…” let us hasten today to Bethlehem with our gifts. But what gifts? Some attractive and valuable packages? Perhaps better, we can give some gifts this Christmas which are beyond monetary value: Mending a quarrel, dismissing suspicion, telling someone, ‘I love you.’ Giving something away – anonymously. Forgiving someone who has treated us wrong. Turning away wrath with a soft answer. Visiting someone in a nursing home. Apologizing if we were wrong. Being especially kind to someone with whom we work. Giving as God gave to us in Christ, without obligation, or announcement, or reservation, or hypocrisy.

Let us enjoy and celebrate our Christmas today, but let us also not forget what exactly we are celebrating and that the message of Christmas extends well beyond the festivities. Moreover, we must make Christmas a reality in the present, in the present of every moment throughout the year, each and every day. 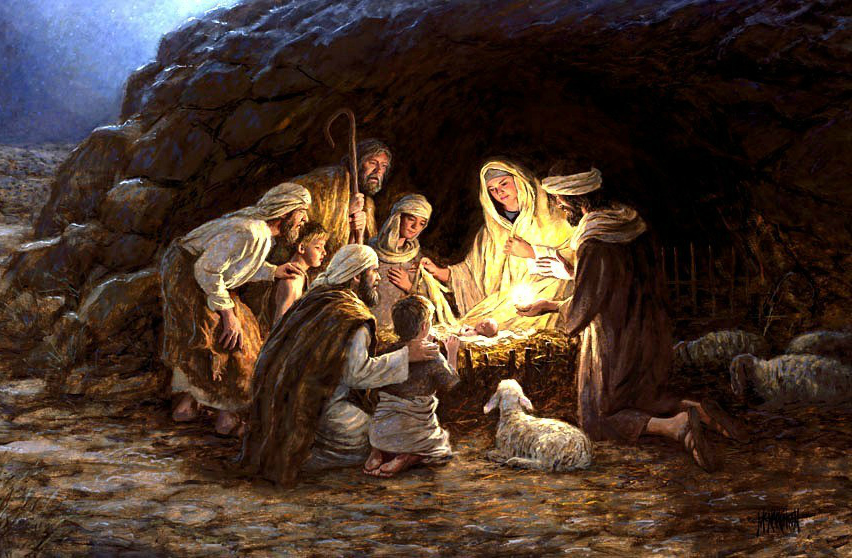 This entry was posted in Christmas Season, English, Friar Gaspar, Year B. Bookmark the permalink.